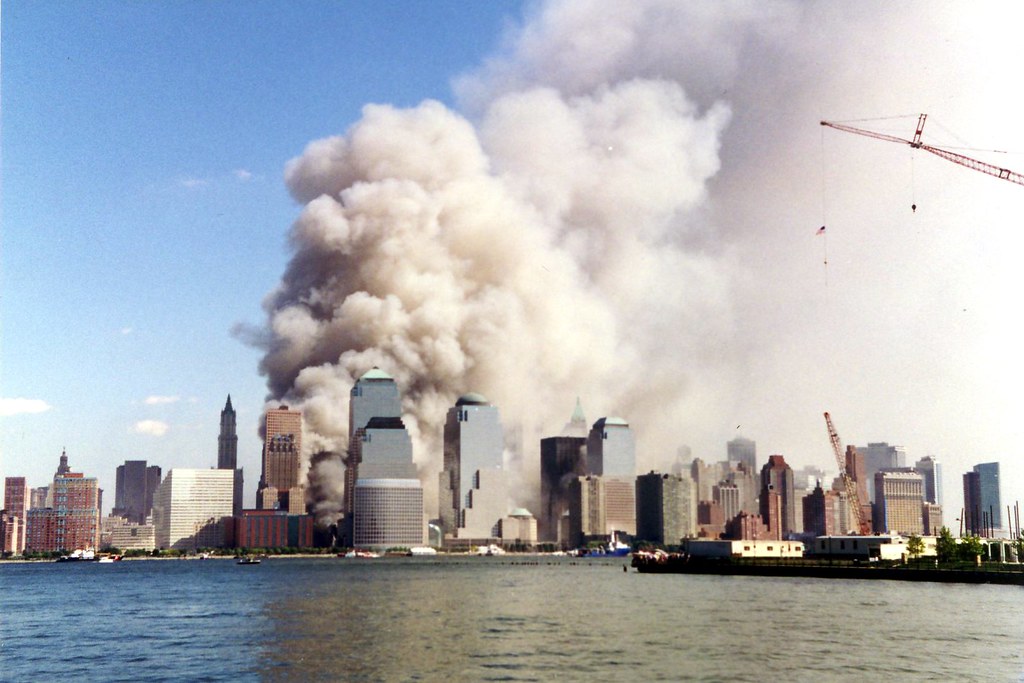 In the wake of the September 11, 2001 terrorist attacks, Americans mourned. American Muslims were among these mourners. They reacted with empathy and support. Even so, many were quick to blame Muslim Americans for the actions of foreign extremists. Knowing this, many Muslims in the New Jersey majority Muslim district put up signs condemning the attacks and disassociating themselves from extremism and violence. President Bush even addressed the American people about unity across religious barriers, saying in his post–9/11 speech that “the enemy of America is not our many Muslim friends.”

But in 2015, Donald Trump challenged this precedent by alleging that he “watched in Jersey City, where thousands and thousands of [Muslim] people were cheering as the World Trade Center collapsed.” Multiple reporters questioned him about the alleged celebrations. He only repeated his story and refused to provide proof. Journalists attempted to find evidence that he could have been telling the truth, but nobody could find evidence of a celebration of that size.

The reason that nobody could find evidence to substantiate his claim is because the story had been completely fabricated. Despite his claim that he watched it on TV, there is no station that can corroborate his claim and there is no recorded footage. However, there were Palestinian celebrations filmed and aired on Fox News, CNN, and NBC. Some theorize that Trump could have watched that film and misremembered it as taking place in New Jersey. Another theory is that his story may have been a ludicrous embellishment of a report of five non-Muslim Israeli men taking photos of themselves on their roofs with the burning buildings in the background. Initially arrested for “puzzling” behavior, police quickly released these men. Regardless of where he got the idea from, nobody has been able to find evidence that any Muslim Americans, let alone thousands, were filmed and aired on television cheering on the attacks.

Since news stations followed up on Trumps claim with reports that only five or so people in the United States publicly celebrated 9/11 (and none were Muslim), one might expect the refuted story to die away. However, the story continued to spread. The fake news story grew a life of its own, as people online claimed to also remember the celebrations that never took place. Even some high-profile people joined in. Nick Vallelonga, the writer of the movie “Green Book,” responded to Trump in a tweet reading “100% correct. Muslims in Jersey City cheering when towers went down. I saw it, as you did, possibly on local CBS news.” Later, he took back his statement and apologized, but his tweet solidified people’s convictions that the celebrations did happen.

Others have reported memories similar to Nick Vallelonga’s. False memories are often a result of the tendency for people to stitch together ideas and memories. One could hear a claim from a false source and generate a memory from that claim that becomes indistinguishable from the truth, even if they are aware that it is a false source. This phenomenon doesn’t just happen to the gullible. President George W. Bush, while in office, claimed to have remembered seeing the first plane hit the tower on television on 9/11 but was later informed that no video was taken or aired of the first plane. The memory was fabricated based on the stories he had heard of the plane crashing.

False or incorrect memories are common, in fact. Researchers followed a cohort of Americans after 9/11, asking them questions each year about their memories. The results showed that even in highly emotional situations that create what are referred to as “flashbulb memories,” vivid memories of traumatic and emotional events, memories are easily warped and frequently incorrect. Rates of memory accuracy among those in the cohort dropped to 57% in 3 years, while confidence in their memory’s accuracy remained high.

A recently published report analyzed the role of fake news in memory fabrication. The study proved through experimental means that “in highly emotional, partisan political contests… voters may ‘remember’ entirely fabricated news stories.” When combining the results of these two studies, it’s reasonable to assume that some ill-informed gossip could warp videos of Palestinian demonstrations or an arrest of five non-Muslims into false memories of larger demonstrations occurring on American soil, especially if the gossip fits into people’s preconceived biases.

Even now, blogs and social media posts hotly contest the basic fact that no cheering or celebrating was aired on television. Stories of government conspiracies like “Bush did 9/11” are common enough in a world where false information can be distributed anonymously to millions of people with the click of a button. What makes this false gossip different, is that it has the support of the most powerful office in the United States. President Trump, among others, continues to push this fake news story with complete faith in the accuracy of his memories.

But memory is fallible. Take Nelson Mandela, for example. A significant portion of people remembered him dying in prison decades ago. In reality, he was doing just fine until he died in 2013. This phenomenon, known as the Mandela Effect, is common enough, and reveals the fragility of perception and memory. This is why respected news organizations rely on cold, hard evidence to verify stories. Perception and memory are easily manipulated, but documents and video, are more reliable over time.

While, there is value in memory and experience, the value isn’t always in its use as evidence. Instead, memory is a way to understand how certain people and groups perceive the past, which can add depth to verifiable fact.  However, societies are based on a common understanding of truth. Debating policy is impossible when basic facts are contested. If someone believes that thousands of Muslim-Americans celebrated on 9/11, their world view, and therefore, their political opinions will be incompatible and irreconcilable with the opinions of those who are aware of reality outside of themselves. Acknowledging the limits of memory will help our polarized society find common ground.