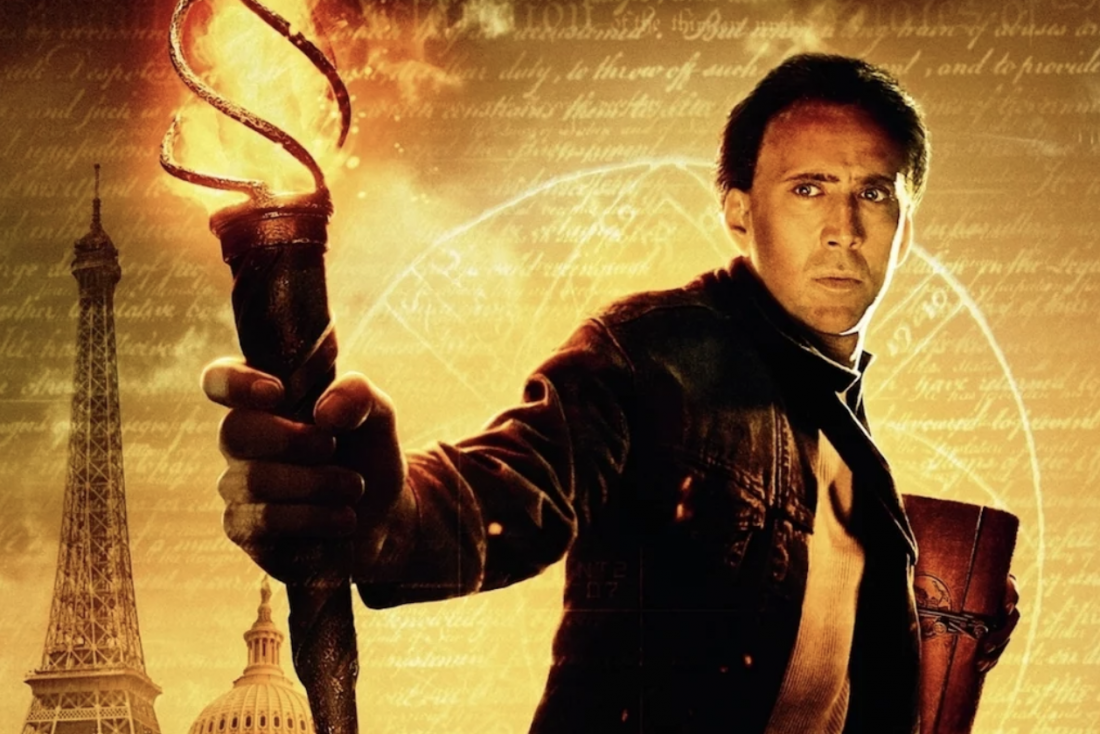 What do the Da Vinci Code, income taxes, Beyoncé, the Rhodes Scholarship, Hamas, the Apollo moon landing, and John F. Kennedy all have in common? They all helped contribute to the story that became National Treasure.

In November 2004, hundreds of thousands of children and parents alike were introduced to the world of National Treasure. As its title suggests, the movie tells a story of a long-lost, ancient treasure, a story entwined with the history of Freemasonry as well as the American Revolution. The entire plot revolves around the intersection of a few long-established conspiracy theories, and thus is the perfect story to engage children with the “past” and make a lot of money doing it.

This treasure, as Nicholas Cage’s character learns as a child, is a collection of priceless artifacts from the Old World collected by the Knights Templar. The Knights Templar were a real, prolific Christian military order of the late middle ages, and it is rumored that they hid a massive treasure from their rival, King Philip of England. After the downfall of the Knights in the fourteenth century, the treasure of the film was left untouched until the eighteenth century. That was when a guild of English stonemasons, the Freemasons, supposedly discovered the collection and called it their own. In an effort to preserve the priceless treasure, the film describes how they brought it along with them to America, where the Founding Fathers protected it during the American Revolution and generously left clues behind for future treasure hunters.

The real history of Freemasonry is a bit more political. Freemasonry had a lot of power in the eighteenth century due to the fact that many powerful and famous politicians of the American Revolution era were high-ranking Masons. Supposedly, at least nine signers of the Declaration of Independence were Freemasons, including Benjamin Franklin. George Washington was even a Master Mason, the highest degree of Masonry.

These Freemasons met in lodges scattered across the East Coast to fraternize and enjoy the company of their fellow Masons. Although according to Masonic regulations there is to be no discussion of politics or religion in lodges, it is obvious that these fraternal relationships would have often overlapped with exclusive political networks.

The Masons’ secrecy within a democratic society led Americans to invent numerous conspiracy theories about them. As Richard Hofstadter discusses in his essay “The Paranoid Style of American Politics,” Americans have long accused Masons of carrying out secret plots according to their own set of laws and punishments, since they seemed to be more loyal to one another than they were to be loyal to the law.

Americans’ paranoia surrounding Masonry heightened in the midst of the Illuminati scare of the late eighteenth century. In 1797, British physicist John Robinson wrote a book titled Proofs of a Conspiracy that accused a Bavarian Freemason offshoot organization called the Illuminati of conspiring to subvert Christianity and good order. This conspiracy theory gained momentum in the United States when Boston minister Jedidiah Morse delivered a sermon warning Americans of the imminent threat of the Illuminati. President George Washington, hoping to avoid a conflict, wrote a letter dismissing the threat of the Illuminati, which only served to thicken the conspiracy.

By the 1830s, an entire Anti-Masonry movement was hard at work, renouncing Andrew Jackson’s presidency and condemning the apparently anti-American ideologies of Freemasonry. The main sentiment behind the Anti-Masonic Party was a rejection of the aristocratic secrecies of the Freemason guild. To Anti-Masons, Masonry ignored democratic values such as transparency and equal privileges. Democracy was meant to be a relief from the covert politics of England, it was meant to allow for transparency in government. Secret societies, especially Freemasonry, allowed early American political leaders to tout their transparency in their political life, while still leading a social life doused in secrecy. Anti-Masons found this threatening. To them, Masonry was “Hell’s master piece.”

Freemasonry, or at least the historically true elements of it, eventually died down towards the end of the twentieth century. It wasn’t because of the hard work of the Anti-Masonic party, or because of another adversarial secret society working to break the back of Freemasonry and win their rightful place in the ruling of the earthly world. Unfortunately, it’s a far more trite tale: people just got bored. With the rise of individualism, increase in personal access to information, structural and social investments in equality, and the overall progression of technology, Americans disengaged from their communities more than was before possible. Masonic lodges are no longer necessary meeting places for those with the wherewithal. Instead they remain as a tradition, a symbol, a testament to the days of Freemasonry.

However, Freemasonry still has a powerful effect on the way Americans interact with conspiracy theories. Even now, when Freemasonry and the Illuminati are often only discussed in reference to elements of popular culture, the idea persists that a few exclusive organizations controlling the world as it is. The truth is that politicians and celebrities do live in a different world than the average American. As long as these other worlds remain somewhat transparent to the average American, then maybe there is no real reason to fear these conspiracy theories.