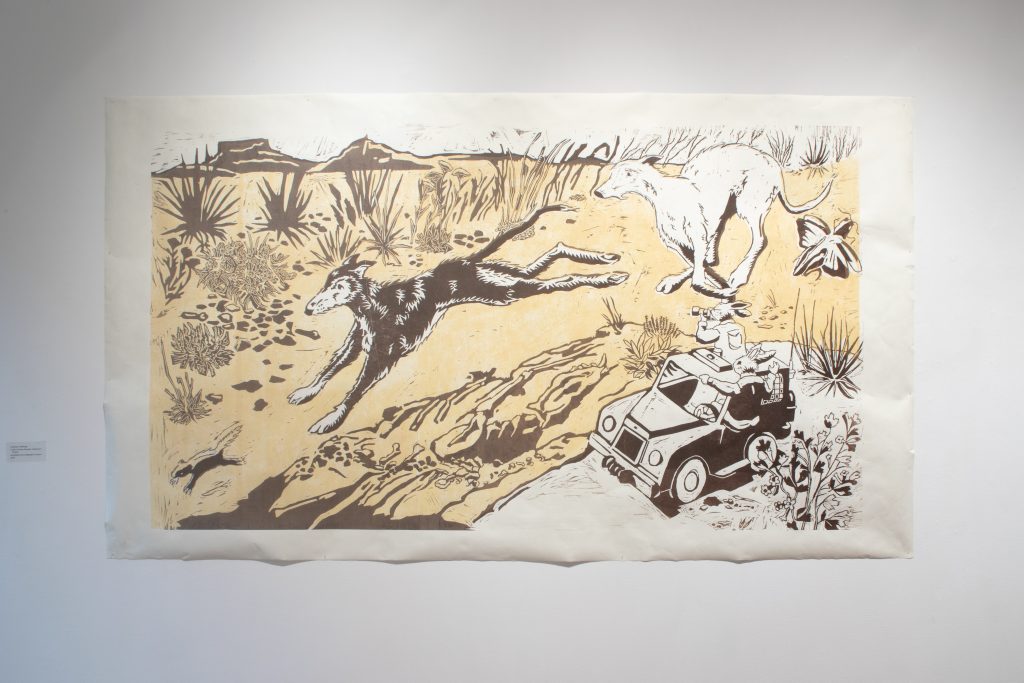 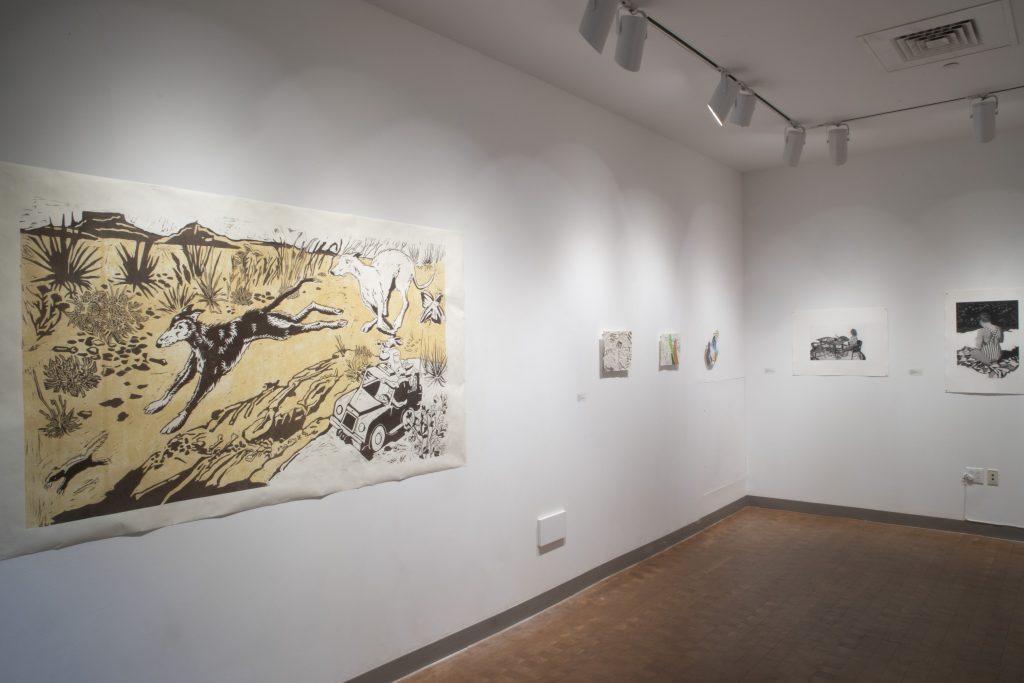 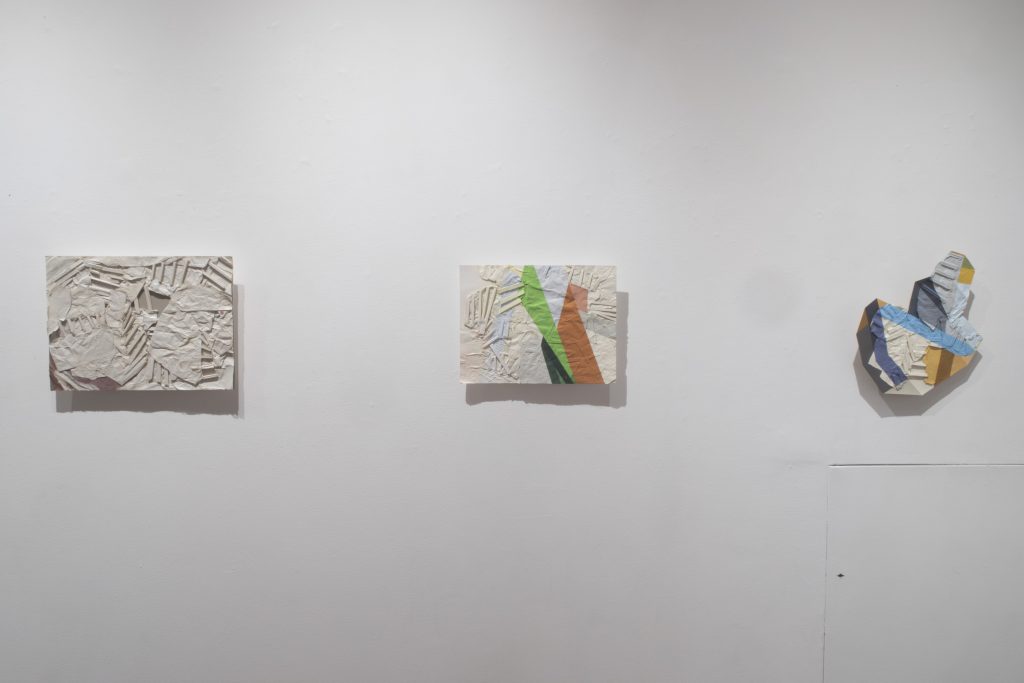 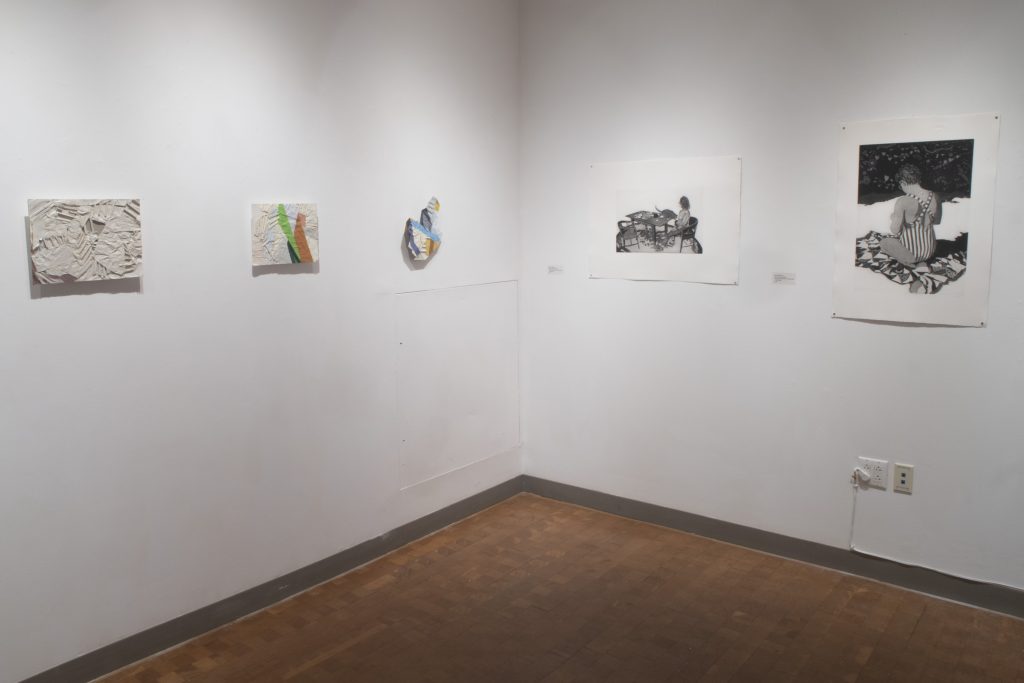 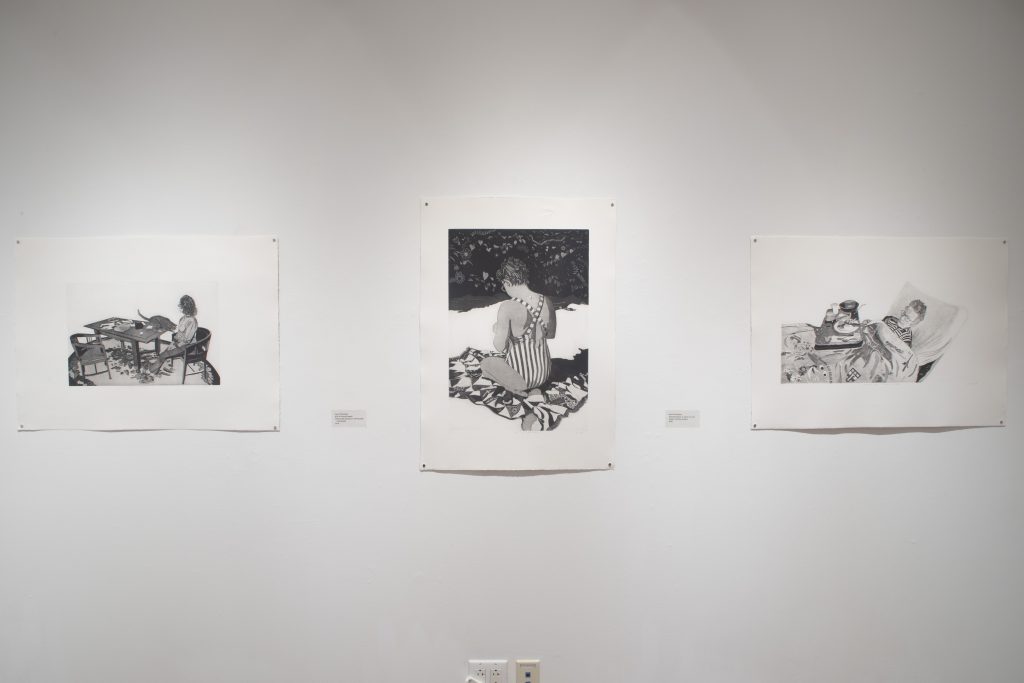 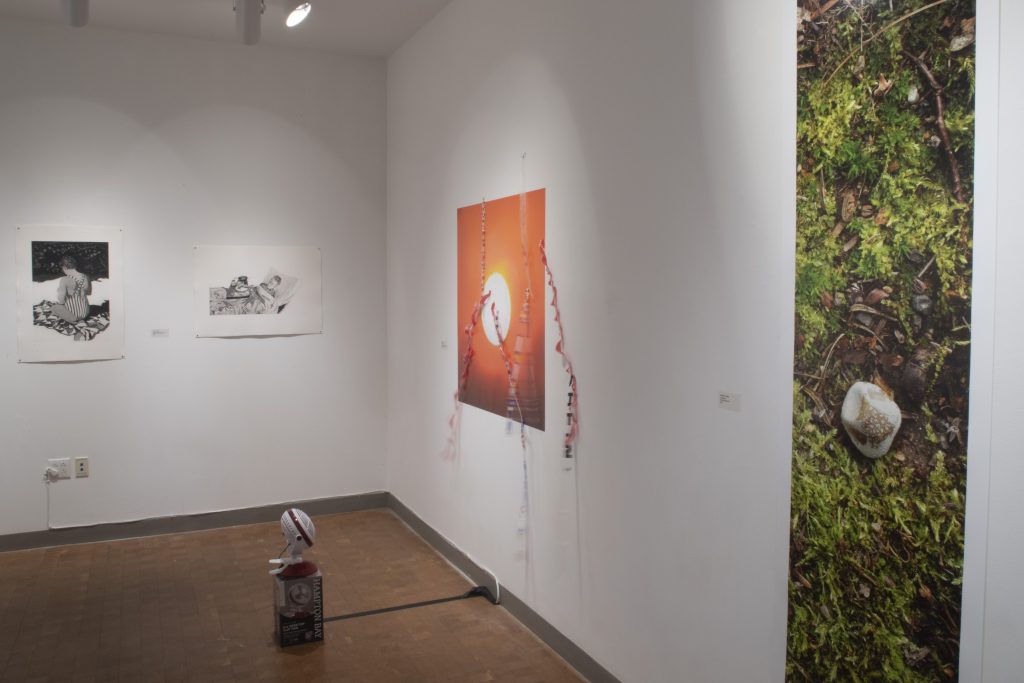 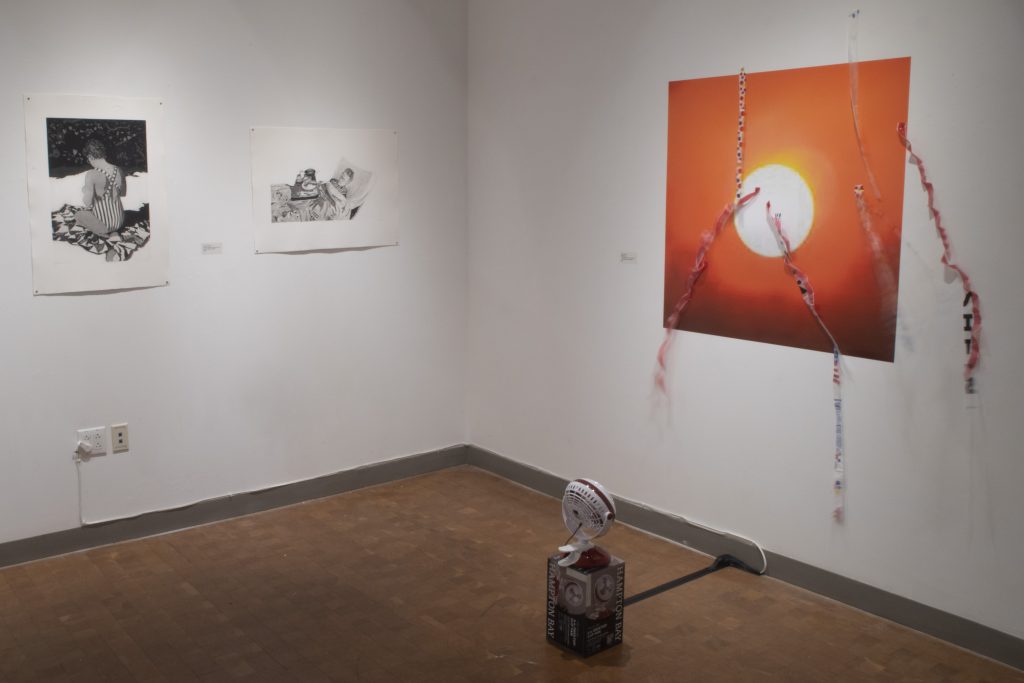 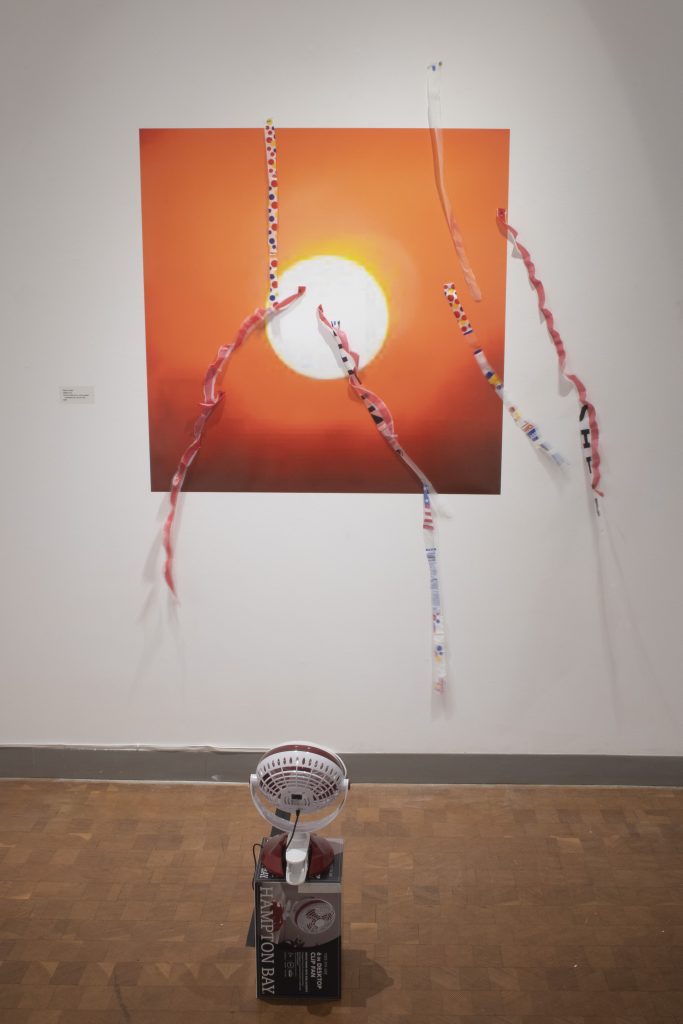 Since 1997, I have worked with rabbit imagery to explore whether a long-eared herbivore can communicate complex emotions and ideas. Over time, these characters have begun to engage and explore their world through scientific discovery. I focus on scientific disciplines that offer a view of the rabbits’ place in the larger processes of the natural world, my hope being that the viewer sees a strange reflection of human discovery in a new species (albeit a fictional one) “rediscovering” the world they inhabit.

In the past, I have portrayed scenes of scientific discovery drawn from the history of biology and geology, the evaluative procedures scientists use to understand the environment, and described actual studies based on field notes, photographs, and theses from the archives of Harvard Forest near Athol, MA. This image depicts the landscape of the Agate Fossil National Monument in Harrison, Nebraska, where I was an artist-in-residence. I was intrigued by the early Miocene beardog’s resemblance to my late lurchers, Dinah and Thelma – with a large chest for the pursuit of prey. Here, field biologists take in a hunt, while the fossil remains reflect the past and present.

These pieces are from a series called “The World is Flat,” in which I made small sculptures out of paper and balsa wood, ran them through a printing press, and then painted on them. In a partly intuitive and partly logical way, I was thinking about the relationship between physical and pictorial structure. The pieces are intended to move the eye between the physical presence of the materials–paper, wood, ink, and paint–and the materials’ pictorial characteristics–compositional structure, implications of perspective, or evocations of light. I’m curious about what happens when the eye jumps back and forth between seeing a line as a graphic element and seeing it as a physical thing. What does the eye jump over?

This work is an exploration of love, loss, violence, and queerness. Kevin’s subject matter ranges from everyday moments of monotony to moments of intense passion, happiness, and anger. Each narrative only reveals a small amount of information as a way to maintain ambiguity and regain control over once seemingly uncontrollable situations as a form of catharsis. Through the use of stylized black and white forms and familiar/relatable imagery he creates an inferrable dialogue between each space and the figures that inhabit/have once inhabited them.

My art is a daily practice of feeling and reacting that I began nearly 3 years ago on Instagram. Because my art making has always involved quick and low-fi processes I decided to use instagram as a sort of diary of materials and strategies.

The two main impulses behind the work are:

1)To combat habituation and complacency. To reawaken and redirect my desire. To make desire productive.

2)To practice responding in order to resist larger systems of power and control. Sometimes I feel like Wonder Woman with the magic bracelets deflecting all this stuff coming at me.

I use all kinds of objects from around my home, from online images to product packaging. I gravitate towards the stuff of a life that passes quickly and often unnoticed (disposable items for instance). These items also tend to accumulate and can threaten to overwhelm. Take for instance all the plastic waste one generates, or all the online news images that we scan past each day of disasters and political unrest.

My strategies of making are basic and playful. Things like piling, stacking, layering, balancing. I keep the process as quick and simple as possible to reduce the number of decisions I have to make. I like to think my work is not so much about me, but rather I create moments and situations that point to larger systems and scales. I have to approach objects with a sense of openness and wonder. I have to be unguarded and let myself go to a certain extent because I want the objects to lead.

I never want to feel stuck. It’s about opening up possibilities.

You can see more of my art on Instagram

My work explores the reproduction of natural and technological forms across widely differing scales, from a bend in the Connecticut river to the curve of a twig. Referencing aerial photography, I capture detailed strips of the ground at an altitude of about two inches. I use a robotic tripod to slowly and methodically capture images that span time as well as space. Using a nearly pinhole aperture and slow shutter speed, I gather as much detail and depth of field as possible. Combined with the persistent motion of the robot, one end of the work is created 20 minutes or more after the other end. The robotic methodology reflects my ongoing fascination with the boundaries between technological and living systems.