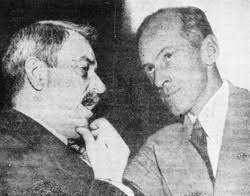 Senator Joe McCarthy is known for his sensational hunt for Communists in the U.S. government during the 1950s. He spread lies and rumors to spark a public outcry against Communism. But his methods didn’t end there. McCartney also did some cutting and pasting, Photoshop before Photoshop existed, in order to strengthen both his personal and political agendas.

After McCarthy claimed that there were 206 Communists working in the State Department, a subcommittee of the Senate Foreign Relations Committee investigated the allegation. Four-term Democratic Maryland Senator Millard Tydings was in charge of the proceedings and found no factual basis for the charges, calling them a “fraud and a hoax.” This conclusion was true, but it angered McCarthy.

He embarked on a mission to defeat Tydings in his bid for reelection, funneling money into his opponent’s campaign and attacking both Tydings and the Democratic Party as a whole for not protecting America against Communism. The crux of his attack was a doctored photograph that made it look like Tydings was talking to Earl Browder, the head of the American Communist Party. 300,000 copies of the photo were circulated once McCarthy’s team released the photo during the final week of the campaign.

The United States was in the thick of the Cold War in 1950, the year of the election. A vast majority of Americans held deeply anti-Communist views, so the photo was not well-received among the voters. The American Communist Party had actually expelled Earl Browder four years prior, but that didn’t matter. He was the face of the party to the public. Tydings lost reelection.

He filed a complaint with the Senate Rules Committee’s Subcommittee on Privileges and Elections in December. Even though the subcommittee found that McCarthy had played dirty, John Marshall Butler, his opponent, retained the seat, due to the lack of campaign regulations at the time. Tydings tried to win back his seat six years later but fell ill and never got the chance.

In McCarthy’s time, a photograph like the one he circulated could do a lot more damage than it could seventy years later because then it wasn’t as easy to tell if a photo was faked. Superimposing was not typical, so media consumers weren’t even thinking about the validity of a photo when they saw it.

This wasn’t always the case. Before photography, images were in the form of drawings and paintings. These were always adjusted to put forth the best version of reality. A portrait of a king would show him as taller than he really was, or a battle scene would lay out courageous poses for the “heroes.” And even when photography was born, photographs were edited to create a “better reality.” The expectation was “not [a] literal, but spiritual and eternal truth.” People knew to view the images with a grain of salt. But with the rise of realism and objectivity in the early twentieth century, this notion disappeared and photographs were supposed to be taken at face value. As a result, when the Tydings photo was released, there was no question about whether it was real.

Political leaders caused many other images to be doctored for political reasons around this time. Stalin erased his enemies from images in order to “rewrite history.” Mussolini removed a horse handler from a portrait in order to appear like more of a leader to his country. Canadian Prime Minister Mackenzie King edited King George VI out of his photo with Queen Elizabeth II allegedly in order to have a more powerful image to use in his next campaign. These were all attempts to solidify legitimacy or hold onto power. In contrast, McCarthy’s photo was intended to delegitimize an enemy and deprive him of power.

This isn’t the only thing that differentiates the McCarthy instance from the rest. There is a range of severity and moral implications concerning doctoring photos, and this case goes further than the others. Cropping or editing someone out of a photograph is not the same as adding someone in. The only known time that Browder and Tydings ever interacted was during the hearings that investigated McCarthy’s charges. The photograph created a reality that never existed, whereas cropping is removing context. Neither are great, especially coming from people in positions of power. But the McCarthy photo was more misleading because it was created out of thin air.

By the early twenty-first century, Photoshop became common, making it easier to tell if a photo was real or faked. Fake photos and videos proliferated across the Internet, and people became more cautious about them. People Photoshop for a variety of reasons: for fun, for design, for attention, for spreading fake news. It’s everywhere.

However, there is a difference between a teenager editing themselves next to their favorite celebrity and a politician spreading a doctored photo of a political enemy that makes them look bad. People in positions of power have greater influence and when they falsely present their image as the truth, there are greater consequences. It can even result in the end of a twenty-four-year Senate career.

Joe McCarthy was in a position of power and took advantage of it in order to attack an opponent. He had no idea that editing photos would become so commonplace. Tydings was certainly not going to be the last victim of this type of photo magic.