Mark Twain Did Not Sacrifice Babies to Moloch 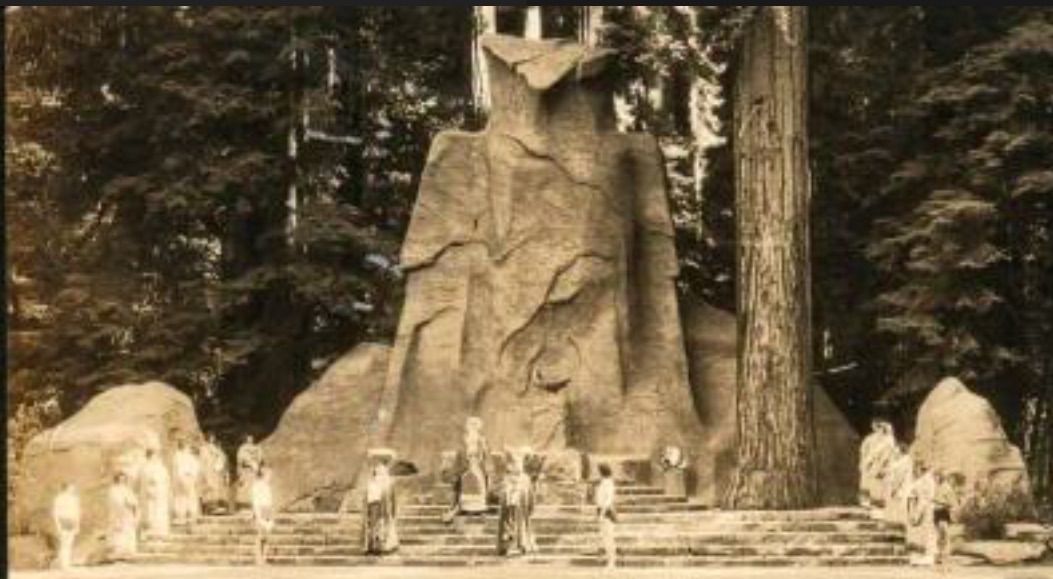 In 2000, Alex Jones filmed a documentary titled Dark Secrets: Inside Bohemian Grove, supposedly revealing the suspicious happenings in The Bohemian Club in Bohemian Grove, California. He claimed he had proof that some of the most powerful men in America were part of a secret cabal of Satanists running a global government.

These claims are ridiculous, but the Bohemian Club maintains enough secrecy that it is difficult to disprove the claims of a conspiracy. What the public does know about the Bohemian Club sounds relatively innocent, if a bit frustrating. The Bohemian Club was founded in in the 1870s, but soon after, wealthy politicians and businessmen took control of it. Nowadays, the Bohemian Club is almost entirely made up of powerbrokers and well-connected, wealthy, primarily white, conservative, Christian men. A new member can only be inducted after a vote by a panel and an induction fee affordable only to the wealthy. The club hosts a two-week retreat once a year, called an “encampment,” where members hike, perform plays, and give presentations called “Lakeside Talks.” Its more well-known members have included Ronald Reagan, Richard Nixon, Mark Twain, and Walter Cronkite. Major controversies regarding the Bohemian Club include a lawsuit claiming that their male-only hiring policies were discriminatory and an accusation that they were violating the terms of their logging license, which was later revoked. 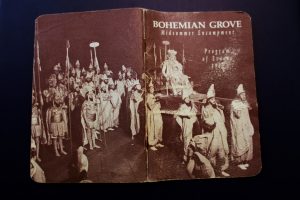 Most conspiracy theories focus on the two-week encampment. It begins with an opening ceremony called the “Cremation of Care” in front of the camp’s totem, a large cement owl. The Cremation of Care is a play written by one of Bohemian Grove’s founding members, James T. Bowman. More reliable sources describe it as an odd play. Less reliable sources describe it as a Satanist sacrifice. Conspiracy theorists such as Alex Jones claim that members sacrifice an effigy of a child to the Biblical child-eating pagan god named “Moloch,” and take part in homosexual orgies, human sacrifices, and sex trafficking. The grain of truth in this mess (and possibly one of the origins of the devil worshiping conspiracy theories) is that during the Cremation of Care, according to the Los Angeles Times, members of the Bohemian Club do in fact, burn an effigy, although not of a child. Instead, they burn an effigy of “dull care,” symbolizing that they are releasing their anxieties about the outside world.

In years past, activists have protested outside of Bohemian Grove during the encampment for a variety of reasons. Mary Moore, lifetime activist and longtime protester of the Bohemian Club, claimed that while the Satanist, baby-murdering conspiracy theories are “all bullshit,” she fears that politicians and business executives use the club to make political decisions and influence public policy without transparency. Moore specifically worries about the Lakeside Talks, which she claims are “public policy talks, where these powerful people discuss and choose policy, but they do so in secrecy, with no public scrutiny.” There is evidence to support her theories. Nixon did give a presentation on foreign policy to the audience at Bohemian Grove in 1967, despite that the club’s claim that public policy would never be discussed at camp. Bohemian Grove is a home for all sorts of conspiracy theories, some credible, some incredible, and some downright ridiculous. In 2010, 9/11 conspiracy theorist Brian Romanoff camped outside of Bohemian Grove with a sign reading, “The Case for Explosive Demolition of the WTC Towers,” presumably accusing the politicians in the Bohemian Club of knowing or being responsible for the attack.

The most outrageous conspiracy theory comes from Alex Jones. He claims that the Bohemian Club is a part of a “secret commission running the world.” He attests that all the inner workings of the Manhattan Project were organized from Bohemian Grove, that the global economy is controlled by the Bohemian Club, and that politicians are forced to join if they want to curry favor with the unnamed “true puppeteers” of American politics.

Even though the Bohemian Club is still alive and kicking, interest in the conspiracy theory has decreased substantially since the 1980s. It is a dying conspiracy. In the 1990s, dozens showed up with posters and signs to protest every encampment. But in 2010, one person showed. One could attribute this to the rise in political polarization. Many people see politics today as a war for the heart of the country. They may be less willing to damage the reputation of their own party through conspiracies and more willing to villainize the opposition. Bohemian Grove may also just not be relevant anymore. People hardly care about the “big names” of the Grove anymore. Conspiracy theories about Walter Cronkite, Nixon, or Reagan aren’t going to play as well with modern audiences.

Bohemian Grove conspiracy theories might be dying out, but a contemporary version has taken its place, signaling that paranoia of elitist conspiracy is alive and well. The “QAnon” conspiracy theory is the Illuminati or Bohemian Club conspiracy theories of the twenty-first century, adapted to an environment of increased political polarization. Supposedly, a secret cabal of Satanist liberals, including Hillary Clinton and multiple Hollywood stars, are responsible for every evil from world hunger to shootings. The names have been made relevant, the opposition has been villainized, and the message is still the same.