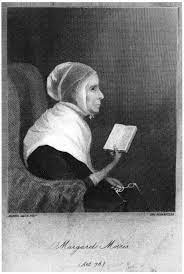 Margaret Morris was born in 1737 as the eighth child of Deborah Moore and Richard Hill. Moore and Hill moved to Madeira for business in 1739, leaving Morris and six of her siblings to be raised by Hannah Moore, their sixteen-year-old daughter.

In 1758, Margaret married William Morris, a merchant, with whom she had four children. Following her husband’s death in 1766, the newly widowed Morris faced the prospect of raising four young children alone. In 1770, Morris and her children moved to Burlington, New Jersey, to live near her sisters Sarah and Milcah.

In addition to her responsibilities as a mother, Morris was one of the first American women to practice medicine, treating patients with ailments ranging from smallpox to battle wounds. She treated both Patriot and British patients during the American Revolution, and witnessed firsthand the arrival of troops in Burlington. Morris chronicled her experiences of the revolution in December 1776. Her diary, kept for the entertainment of her sister Milcah, outlines her encounters with soldiers and her efforts to defend her home from pillaging. Following the war, Morris opened an apothecary in 1779 to support her family and put her medical skills to use.

Morris’s home in Burlington was close to the site of the Battle of Trenton that took place on December 26, 1776. Morris’s diary chronicles the events that led to the battle. As pacifist Quakers, Morris and her friends faced accusations of treason, some of which resulted in the 1776 imprisonments of seventeen of Morris’s friends. New Jersey was highly trafficked during the war because it was conveniently located near both New York City and Philadelphia.

Morris’s accounts of the Revolution provide not only a neutral perspective of the presence of troops in the colonies, but also shed light upon the hardships of women during the war.

Dec. 6, 1776. Being on a visit to my friend, M. S. at Haddonfield, I was preparing to return to my family, when a person from Philadelphia told me that the people there were in great commotion; that the English fleet was in the river, and hourly expected to sail up to the city; that the inhabitants were removing into the country; and that several persons of considerable repute had been discovered to have formed a design of setting fire to the city, and were summoned before the congress and strictly enjoined to drop the horrid purpose. When I heard the above report, my heart almost died within me, and I cried, surely the Lord will not punish the innocent with the guilty, and I wished there might be found some interceding Lots and Abrahams amongst our people. On my journey home, I was told the inhabitants of our little town [Burlington, New Jersey] were going in haste into the country, and that my nearest neighbours were already removed. When I heard this, I felt myself quite sick; I was ready to faint. I thought of my S. D. [Morris’s younger sister, Sarah Dillwyn], the beloved companion of my widowed state—her husband at a distance of some hundred miles from her; I thought of my own lonely situation—no husband to cheer with the voice of love my sinking spirits. My little flock, too, without a father to direct them how to steer. All these things crowded into my mind at once, and I felt like one forsaken; a flood of friendly tears came to my relief, and I felt a humble confidence that He who had been with me in six troubles, would not forsake me now. While I cherished this hope my tranquillity was restored, and I felt no sensation but of humble acquiescence to the Divine will, and was favored to find my family in good health on my arrival, and my dear companion not greatly discomposed, for which favor I desire to be truly thankful.

Dec. 8. Every day begins and ends with the same accounts, and we hear to-day that the regulars are at Trenton. Some of our neighbors gone, and others going, makes our little bank look lonesome. But our trust in Providence is still firm, and we dare not even talk of removing our family.

Dec. 12. The people of the gallies, suspecting that some troops were yet either concealed in the town, or neighborhood of it, have been very jealous of the inhabitants, who have often been alarmed with reports that the city would be set on fire ; many have gone in haste and great distress into the country, but we still hope no mischief is seriously intended. A number of men landed on our bank this morning, and told us it was their settled purpose to set fire to the town. I begged them not to set my house afire : they asked which was my house, and they said they knew not what hindered them from firing on it last night, for seeing a light in the chambers they thought there were Hessians in it, and they pointed their guns at it several times. I told them my children were sick, which obliged me to burn a light all night. Though they did not know what hindered them from firing on us, I did; it was the guardian of the widow and the orphan, who took us into his safe-keeping, and preserved us from danger; oh that I may keep humble and be thankful for this as other favors vouchsafed to my little flock.

Dec. 13. This day we began to look a little like ourselves again. The troops were removed some miles from town, as we heard, and our friends began to venture out to see us; but the suspicions of the gondola men still continued, and search was made in and about the town for men distinguished by the name of Tories. About noon of this day, my dear R. W. [Richard Wells, who was married to Morris’s sister, Rachel] popped in upon us; he had heard the firing yesterday, and being anxious for our safety, he run the risk of venturing amongst us to see how we had fared; surely this proof of his love will never be forgotten by me while my memory lasts; he left us after dinner.

Brandt, Susan. “‘Getting into a Little Business’: Margaret HillMorris and Women’s Medical Entrepreneurship during the American Revolution.” Early American Studies: An Interdisciplinary Journal 13, no. 4 (2015): 774–807.