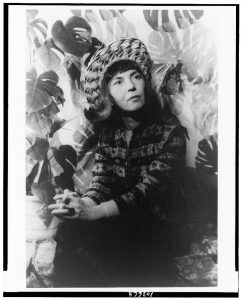 In her only published artist statement, written for the 1946 exhibition Fourteen Americans at the Museum of Modern Art, Loren MacIver (1909-1998) wrote, “My wish is to make something permanent out of the transitory, by means at once dramatic and colloquial. Certain moments have the gift of revealing the past and foretelling the future. It is these moments that I hope to catch.” MacIver was an artist beloved for her ability to add charm and mystery to the everyday scene.  Her work was constantly in conversation with that of the modernist poets with whom she surrounded herself, which is evident especially in her chosen subject matter—objects and scenes of the mundane, which she transforms through her extraordinary, unique vision of the world.

This website is a compilation of MacIver’s paintings alongside selections of sketches, photographs, notes, and letters from throughout her life.  Many sections are also accompanied by poems by e e cummings and Elizabeth Bishop, both good friends of MacIver for many years. I hope, in partnering MacIver’s archival material with the poetry of her close friends, to create a picture of the creative, mostly literary, dialogue with which her artwork was engaged throughout her lengthy career.

The website is divided into 15 categories of subjects in MacIver’s work, represented on the main page by orbs from her 1959 painting Subway Lights. The orbs are organized roughly chronologically from left to right (when viewed on a fully extended wide screen), and the horizontal line of orbs in the middle represents the more “central” subjects of much of MacIver’s work: Sea, City, Moon, Europe, and Food. The surrounding orbs can hold anything, from little notebooks and souvenirs from abroad, to other sketches and poems.

As the website itself is fairly abstract, and little is dated definitively, I have made a brief timeline of MacIver’s life below to help ground everything in time.  Because the archival material available for this project cut off around the year 1970, I have also ended the timeline there.