As a native New Yorker, the city was always a central source of inspiration for MacIver. Even in her work that doesn’t directly deal with the city as a subject, the vibrant light and movement that can be seen in many of her paintings reflect a lifetime of studying the twinkling, active lights of the city. While she was born and raised in the Bronx, Loren moved directly after high school to live in Greenwich Village where she lived alone for one year before marrying Lloyd Frankenberg in 1929, then a student at Columbia. She would live in Greenwich Village until her death in 1998. 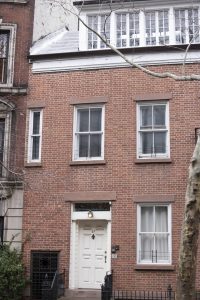 The above photograph is of 61 Perry Street, where Loren and Lloyd moved in 1942. They lived on the top floor, and the large skylight was an inspiration for many of MacIver’s paintings.  Loren would continue to live there until her death in 1998.

No foot could endure it,
shoes are too thin.
Broken glass, broken bottles,
heaps of them burn.

Over those fires
no one could walk:
those flaring acids
and variegated bloods.

The city burns tears.
A gathered lake
of aquamarine
begins to smoke.

The city burns guilt.
— For guilt disposal
the central heat
must be this intense.

to where run, molten,
in the dark environs
green and luminous
silicate rivers.

A pool of bitumen
one tycoon
wept by himself,
a blackened moon.

Another cried
a skyscraper up.
Look! Incandescent,
its wires drip.

The conflagration
fights for air
in a dread vacuum.
The sky is dead.

(Still, there are creatures,
careful ones, overhead.
They set down their feet, they walk
green, red; green, red.)

This poem by Elizabeth Bishop, who spent time in Loren and Lloyd’s 61 Perry Street apartment in Greenwich Village while they were living in Paris in the late 1960s, shows the differing ways in which MacIver’s contemporary and friend reflected on similar themes.  “Night City,” viewed in partnership with MacIver’s city paintings, shows the complex nature of the artist’s relationship to the romanticized city. It can be a wonderland of twinkling lights or a whirlwind of moving color, as we often see in MacIver’s work, or, as in “Night City,” a blazing, wrought place of human suffering.