A Bright Future for SCJC 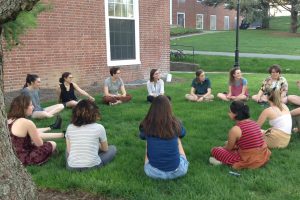 Jewish student life at Smith is in a phase of growth and vibrancy. In the two years since the group officially changed its name from Smith Hillel to the Smith College Jewish Community (SCJC), the organization has grown exponentially. Shabbat dinners now host upwards of 40 students each week; more than 60 students in costumes celebrated Purim this year; and the SCJC Passover Seder had over 70 attendees.

There were a number of reasons why the Jewish student organization at Smith College changed its name. In truth, Smith has not been part of the Hillel network since the 1980s when, due to financial belt tightening, Hillel International had to cut funding to small colleges with less than 500 Jewish students (Smith College has 200-250 Jewish students). The Smith College administration held a deep belief that Jewish programming was crucial, so Smith retained both the Hillel rabbi and his programming. The Hillel rabbi became a chaplain for the College, and Smith took over administration of the Kosher Kitchen.

At the time, it seemed natural to keep the name Hillel, so the years rolled on and the name stayed. But last year two things happened. First, Smith College built a new Kosher Kitchen in Jordan House. Second, the student organization moved from Dawes House to a new, more central location. In part of this new era, the student board decided it was time for a name change.

So we are now the Smith College Jewish Community, dedicated to being a home for all Jewish students at Smith. Activities at the SCJC range from holding periodic Shacharit weekday services, to regular “contact your state and federal representatives” nights, where students make phone calls and send postcards concerning current issues. The SCJC has held traditional Friday night services, a Humanistic Judaism service, and Kabbalat Shabbat singing with no services at all. The SCJC has participated in events related to the Movement for Black Lives and cooked dinner with Muslim students at the Kosher Kitchen.

The SCJC board is working to create a space that is open to dialogue and welcoming to views along the whole spectrum with respect to the Israel-Palestine issue. SCJC also works closely with the Center for Religious and Spiritual Life, which strengthens its programming and helps support the community in its responses to world events and programs such as Yom HaShoah, Holocaust Remembrance day. Through the Center for Religious and Spiritual Life, Jewish students connect and become involved with interfaith activities.

We honor and remember the days when the Jewish student organization was called Smith Hillel with deep affection. Now, the Smith College Jewish Community is working toward an exciting future.