The Glowing Influence of the Spring Equinox 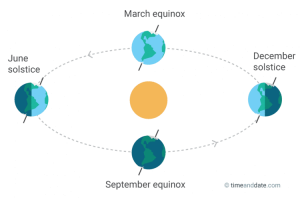 The spring equinox, which fell on March 20 this year, is considered the first day of spring, and is recognized as a holiday across many religions and cultures. The spring and fall equinoxes mark important moments in our orbit of the sun, when the Earth’s tilt presents the Northern and Southern hemispheres equally to the Sun. All winter, we in the North have been tilted away from the sunlight, making our days are shorter and colder. The vernal equinox marks our shift towards summer: “equinox” (Latin) translates literally to “equal night”, suggesting that day and night are the same length on the equinox. (Although this isn’t strictly true; see Time and Date for more information about this). The equinox, then, is the tipping point between winter and summer, between cold and warmth.

In pre-Industrial civilizations, people’s lives were dominated by the patterns of the seasons; tracking the sun was a matter of survival. These societies were acutely aware of the length of the days and the angle of the sun, and they marked the equinoxes and solstices as crucial turning points in the seasons. The spring equinox represented themes of rebirth, renewal, and fertility—many cultures celebrated their new years on or near the spring equinox. Some holidays also involve the theme of good triumphing over evil, as sunlight regains dominance over darkness, cold, and night.

During the European Middle Ages, the New Year began on what is now March 25. Some historians suggest that the practice of April Fool’s Day may originate from the time when some societies had switched to the newer Gregorian calendar while others used the old one, with the former playing pranks on the latter. In Baha’i and Zoroastrianism, both originating in ancient Persia (modern-day Iran), Naw-Ruz or Nowruz is the New Year and is celebrated on the vernal equinox.

Other cultures hold celebrations around the spring equinox as well. In India and Nepal, the Hindu festival of Holi is observed on the full moon around the end of February or the beginning of March. Holi rejoices the arrival of spring and the victory of good over evil. In Judaism, Pesach or Passover celebrates the Jews’ escape from slavery in Egypt, and takes place around the first full moon after the spring equinox.

Many of these spring festivals and holidays share symbols, practices, and even names. Easter or Pascha (similar to Pesach) takes place on the first Sunday after the first full moon after the vernal equinox. Easter is a Christian holiday commemorating the resurrection of Jesus Christ, and is often associated with eggs and rabbits, two ancient symbols of fertility. In fact, the very name “Easter” bears a close resemblance to Ostara/Eostre, the pagan goddess of spring (see Arianna’s article, “Spring’s Promise”). Early Christianity adapted pagan traditions into its celebration of Resurrection Sunday, and these symbols are now integral parts of the holiday.

As the days get longer and warmer, we look ahead to the summer solstice on June 21, which marks more celebration by many cultures and religions around the world.