What does it mean to really welcome somebody? Not just to say, “you are welcome here,” but to truly make a space feel welcoming and inviting to someone? We’ve chosen “welcome” as our theme at CRSL for the year, and I decided to start by exploring what some different faiths have to say about welcoming and hospitality. I was struck by some of the beautiful language about welcoming strangers and, beyond that, the reasons given for offering hospitality.

One of the central themes of Bahá’í is the oneness of all people, and as such the faith has much to say about hospitality and the welcoming of strangers. `Abdu’l-Bahá, the son of the founder of the Bahá’í faith and its leader for many years, had many writings about how strangers should be treated. A passage from Star of the West offers this:

When you meet a stranger, say, “Yonder is coming to me a letter sent me by God.” The outside of the envelope may be dirty, and torn and broken, but if we could open the envelope of the life that comes before us and look within the envelope and learn to read the writing, we would find in every human soul which crosses our threshold or which is yonder over the man-made national border, a message from God, and if we could understand the message it would be God’s benediction to us. (Star of the West, Vol. 6, pg. 46)

The principles underlying hospitality in Bahá’í are the fundamental holiness of all people and a sense of deep empathy arising from that uniting holiness.

Paganism, too, has a strong tradition of hospitality across its many cultures. It is expected that any traveler be offered food, water, a warm hearth, and a place to sleep. There are many tales of gods or goddesses traveling in the guise of mortals, bestowing generous gifts upon those who offered hospitality and bringing their wrath down upon those who slighted them. The possibility that any stranger at your door might be more than they seem reinforces the need to treat all with generosity and respect. But Pagan hospitality is not just fear of vengeance: it is a practical exchange, expecting the guest to treat their host with respect and offer gifts when they can, with the awareness that today’s host might be tomorrow’s traveler, and it behooves us all to offer hospitality when we can.

Hinduism and Buddhism both have highly-structured rituals of hospitality. Hosting strangers and guests alike is one of the five central duties of a Hindu homeowner; the Fivefold Offering of Buddhism similarly lays out the duty to provide food, a place to stay, and aid to all guests. Hindu scripture teaches that any guest should be treated like a god. These faiths go beyond hospitality to friend and stranger: the Mahabharata, an ancient Hindu text, says “Even an enemy must be offered appropriate hospitality if he comes to your home. A tree does not deny its shade even to the one who comes to cut it down.” (Mahabharata 12:374)

Islam likewise enjoins unconditional hospitality from its followers. In fact, of a handful of sins which will result in Allah overlooking someone on the Day of Resurrection, one sin is denying surplus water to travelers. The Quran entreats Muslims to “do good unto your parents, and near of kin, and unto orphans, and the needy, and the neighbor from among your own people, and the neighbor who is a stranger, and the friend by your side, and the wayfarer…” (An-Nisa 4:36, emphasis mine). This particular line makes it clear that neighbors who are from foreign lands or faiths should be treated with equal respect to those who are friends or coreligionists. Muslim dicta don’t expect hosts to beggar themselves for their guests; they are asked only to share as much as they can. And guests have responsibilities too: to give advance notice of their visit if possible, to express gratitude and goodwill towards their host, and to abide by the host’s rules while visiting them.

Judaism has a lot of language in the Torah and Talmud about hospitality towards strangers. The word “ger” represents a stranger who has come to live amongst Jews, to keep their laws (with or without converting to Judaism), and a ger is treated under Jewish law as a protected minority. Further, the language and tradition of Pesach (Passover) weaves a strong message about exile and hospitality: Jews were strangers in the land of Egypt, and G-d made them the “world’s archetypal strangers” so that they would understand on a bone-deep level what it means to be a stranger in a strange land, and treat all strangers they encounter with generosity and respect.

Christianity echoes the Pagan themes of hidden deities: “Do not neglect to show hospitality to strangers, for thereby some have entertained angels unawares” (Hebrews 13:2). Furthermore, Matthew 25:35-40 entails the Messiah saying that every charitable thing “the righteous” did for “the least of these my brothers” was as if they had done it for Him. Thus Christians are entreated to greet each and every person with the generosity and respect due to the Messiah.

So what do these all have in common? There’s a repeated notion of reciprocity, that hospitality is a two-way street between guest and host. More relevant to our questions, there’s a repeated idea that there is a unifying divinity in everyone—or even the possibility that a stranger may be an angel/deity in disguise, and bring punishment for ill treatment. This idea leads to the conclusion that a stranger or foreigner, or even one seen as an enemy, should be treated no differently than a friend, although each faith has its own framework for ensuring this.

Here in the Center for Religious & Spiritual Life, we are working to embody these many notions of welcome. We know that it is not simply a matter of saying “You are welcome here”; this is ongoing work. We seek to give students of all faiths (or no faith) space to gather in community and worship, to provide resources for each faith and for interfaith initiatives, and to make Helen Hills Hills Chapel a building that feels welcoming to all. 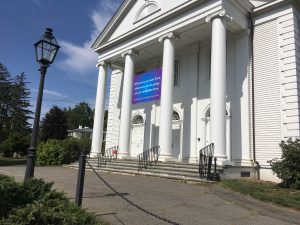 “Wherever you came from, wherever you are going, you are welcome here.”