A Contemporary Perspective on Islamic Traditions

About twenty-five Smithies gathered to dine with Muslim scholar, author, activist Dr. Amina Wadud during the February 9 Jummah Prayer Lunch. Dr. Wadud, professor emerita at Virginia Commonwealth University and research scholar at the Starr King School for Ministry in Berkeley, CA, specializes in gender and Quranic Studies. She came to Smith as part of a two-day conference, entitled “Contemporary Women in Islam Politics and Identity Conference,” sponsored by the Lewis Global Studies Center. Su’di’ Abdirahman ’18, who served on the conference steering committee, invited her to the student-led prayer service at the Helen Hills Hills Chapel. 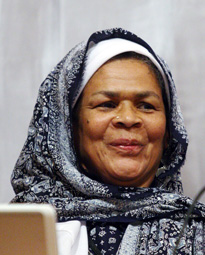 Dr. Wadud wanted to be treated as any other guest. She insisted on participating in the group’s normal agenda for the day. But it was not a normal day. The informal prayer lunch hosted an impassioned female scholar who provided participants with sound guidance. She asked questions, listened, and engaged students in a deepening conversation about Islam. She encouraged students to develop their own formula for Jummah. Students explained that the social engagement aspect of Jummah was an important way of community building but the second half of the prayer service did not work as well for them. They discussed how time was a factor in creating a more formal structure for Jummah which would allow participants to pray together regularly. Students were inspired to examine new possibilities for Jummah Prayer creatively and spiritually. Dr. Wadud recommended that they “deconstruct the rigidity of formula and create something unique…create what the fore mothers will not live to see.” She advised them to keep the conversations going around women leading prayers and use their time together as a “learning circle.”

Many of the students present for Jummah attended the next day’s events, which included a public panel consisting of Dr. Wadud and two renowned Muslim academics, Dr. Kecia Ali from Boston University and Dr. Saadia Yacoomb from Williams College. The panel discussed a historical trajectory of the Quran, higher level studies of Islamic tradition and Islamic history replete with female scholar activists from the 14th century. “What did Allah intend for the woman’s relationship with the Creator?” Dr. Wadud pondered. She acknowledged that young people are not accepting divisions perpetuated by tradition and that “human personhood with the Creator is outside of binary gender.” Dr. Ali discussed an inclusive just theology that is “characteristically modern not feminist” in its conception, and Dr. Yacoomb offered that “religion was a social construct…all human knowledge is a construct,” making it imperative to work across differences. The day was rounded out with a dynamic five-member student panel which grappled with Muslim student life on campus. Students, many of who attend the Jummah service, talked about complex cultural identity, halal dining versus the kosher line, Islamophobia, homophobia, and what it means to be a Muslim student at Smith.

Although the conference has ended, the ideas and intellectual thought stimulated the consciousness of students as they attempt to apply Dr. Wadud’s advice to Jummah and other aspects of their College experience.

The Center for Religious and Spiritual Life has offered Jummah Prayer lunches since last spring. The prayer lunch alternates weekly between the Helen Hills Chapel sanctuary or Wright Hall Prayer Space (in the lower level of Wright Hall) on Fridays from 12:10-1 p.m. All are welcome!

Edit 10 July 2018: Teen Vogue featured an initiative that sprang out of the conference: Believers Bail Out, an extension of the National Bail Out movement rooted in zakat, one of the five pillars of Islam.