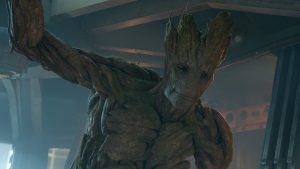 Last weekend I watched a stupid movie with my son and my daughter in law.  My son is involved with the world of medical care, and my daughter-in-law is director of a preschool. They both spend a lot of time worrying about how to make the world a better place.  The day we saw the movie had been a hard day, the world was a mess, their jobs were filled with stress, and even getting their kids to bed on time had been a trial.

I suggested that we watch a movie that had no socially redeeming content,  Guardians of the Galaxy.  This was not their usual fare.  It wasn’t a cook healthy show or a how to declutter show–which is as light as the two of them usually get.  My son was skeptical. My daughter-in-law only agreed provided she could tune out and read.

Thirty minutes into the movie (note: I am not saying “film” because this movie has not earned that epithet.) my son was laughing. My daughter-in-law had put aside her book and was saying “I want a Groot.  Can we get a Groot?” She had fallen in love with the sentient plant in the movie who only could say three words of dialogue,“I am Groot,” over and over again. Both of them were getting teary eyed at the movie’s really cliched, shallow “moments of meaning.”

Sometimes getting teary eyed without any emotional depth is fun.  Sometimes we just have to pause. To put on hold the worry, the self judgment, the feeling that one cannot rest even for an hour or the world will be damaged.   The banner in front of the CRSL states, Reflect Resist Rejuvenate. Rejuvenate is the linchpin to resistance and reflection.

We cannot do the work we need to do in this world without downtime and a little silliness.The world is broken and we are all called to fix it.  When we care deeply however, we are always at risk of burning ourselves out. We need to resist resistance every once in awhile. To leave the complexities behind just for a moment and declare,  “I am Groot.”

Rhonda Shapiro-Rieser is the Jewish Student Adviser at Smith.

This entry was posted in Student Posts and tagged meditation, mindfulness, spirituality, stress/relaxation. Bookmark the permalink.