Our Year on Climate Change: Overcoming the Stagnation of Fear

The climate crisis is a crisis for all of us. The massiveness of its scope can be frightening, even paralyzing.  The completeness of it – that is has touched, or will touch, us all – also presents an incredible opportunity. The climate crisis, as the activist group Extinction Rebellion says, is “beyond politics”.  It is beyond religious divides, racial divisions, borders, gender, class, and ability. How it affects people is usually very different depending on many of the divisions humans have created, but it will affect us all. 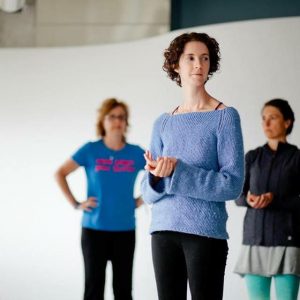 Smith, and to have arrived on campus during the Year on Climate Change.  The climate crisis is at its heart, a human crisis of vision, inclusivity, and compassion. It is a failure to know ourselves to be inextricably linked with the earth that gives us life, and with our fellow beings living on that earth.  It is also a failure to follow the leadership of those, primarily indigenous nations, who value protection and collaboration, over extraction and accumulation. These are spiritual issues, and they are also as secular as a table where there is no dinner because the crops were destroyed by drought.

As an organizer for the local chapter of Extinction Rebellion and a newly arrived Ada Comstock scholar, I was brought in as an intern to help create programming for the CSRL and the Year on Climate Change.  As Matilda Cantwell said in her post “Our Year on Climate Change: Expanding the Golden Rule,” we hope our climate crisis programming will continue far beyond this year.  Many events focus on the facts of the crisis, which is vitally important, but in the CSRL we want to make sure we also attend to people’s hearts, to their mental and emotional wellness in this heartbreaking and confusing time.  We know that our fears make us feel like we are alone, and also that when we can see that we are together, we can create far more powerful changes.

Matilda and I began our work together by supporting a rally in Northampton on September 20, for the Global Climate Strike called by Greta Thunberg and other youth climate leaders.  We helped students coordinate speakers, equipment, banners, and music. When I asked Matilda if we could feed people, she said yes – we provided lunch for many of the hundreds of people who joined the rally that day.  Working at the CSRL helps me to continue to expand my definition of community leadership. Matilda opened the rally that day by reading a beautiful statement written by the Indigenous Students of Smith Alliance, centering their voices.  I think one of the most moving things we did that day was to provide food for people, to literally nourish them as they gathered together.

For the spring, we are planning an event near Earth Day that will highlight the intersection of the climate crisis and border and migration issues.  Immigration issues continue to be front page news in the U.S., and yet are rarely talked about as part of the climate crisis. CSRL wanted to create an event that made these issues more visible, and gave voices to them.  Along those lines, one part of the event will be a “Climate Voices” event with songs sung by Smith’s Glee Club.

“Voices for Climate Justice” will be held on Friday, April 24, 2020 at 4:30 p.m. in the Helen Hills Hills Chapel in celebration of Earth Day.

Adrie Rose wrote this article to highlight the importance of Climate Change.