I remember the first time I really saw the numbers tattooed on Mrs. New’s arm.

I had seen them before, but by 11 years old, I knew enough to really see them.  I remember a 2 and a long chain of numbers with a 7 somewhere in the middle. One of those European 7s with the line across them. Mrs. New was a volunteer mother in the Sunday school. I was helping her set a table for some snacks. Paper table cloth, round paper plates, napkins folded into triangles, blue numbers on an arm. 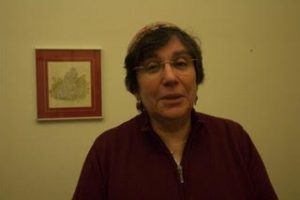 We had a significant number of holocaust survivors in my synagogue. No one spoke about it.  But here, only here, within the relatively safe walls of the synagogue, did one secret come out of hiding. Only here did Mrs. New ever roll up her sleeves.

One Chanukah, I remember walking into the synagogue. My mother, who was the volunteer manager of the synagogue’s religious shop, was pale and distressed. There was anger in the very air of the place. My mother looked embarrassed, ashamed, really. Mrs. New’s face was set in an expression of a fearful countenance all day. Rage veiled within her eyes. That night I got surprise Chanukah gifts. A wood caravan of camels, a wood box, a wooden Jewish Star. My mother told me that they were mine because she had to get them out of the synagogue immediately. I didn’t understand until I saw the small letters under the belly of a camel, “Made in Germany.”

No one considered age appropriate education around the Holocaust. We were still processing and surviving. Mrs. Czar was the fifth grade Sunday school teacher. She did not have a tattoo like Mrs. New. She had been in the Warsaw ghetto. Being blond with blue eyes and being female with no telltale circumcision, she became a runner and smuggler for the ghetto. She would tell stories about when she came close to being caught and killed by the Nazis. Mrs. Czar’s pale blue eyes would glare out at us:

The swastika that had been painted on our synagogue one year seemed to prove Mrs. Czar correct in her prophecy. As an adult now, I shudder at what it must have been like for Mrs. New, who couldn’t bear seeing an object made in Germany, to behold it all happening again.

That is the question woven into the fabric of Holocaust Rememberance Day. Mrs. Czar may be truly prophetic, Mrs. New’s tattoo may be representative of things that continue to unfold. People watched for eight minutes and 46 seconds as George Floyd was slowly murdered.  Other police officers watched. Bystanders watched.

I keep hearing her words. “Let me tell you, no one would help us.” We are called by the very heavens themselves to stop being bystanders. The Biblical prophets didn’t really lend so much importance to their predictions. They used those to draw people’s attention. Then the prophets engaged in the real work. They demanded we be righteous. They demanded we not oppress the stranger. They turned rage veiled eyes on us and commanded in the name of God, that we make a better more just world. Neither Mrs. Czar nor Mrs. New believed that we would. And I?  I still hope.