2021-2022: The Center for Religious and Spiritual Life Explores Transformative and Disability Justice as Spiritual Practices

This year as Smith focuses on “Democracies,”  we are painfully aware that social injustices were woven into the fabric of our society at its founding. We also find ourselves at a point at which the very structure of democracy in this country is under siege. Can justice be restored to our democracy or was it ever there to begin with? Are we set up for failure; insofar as exploitation, cruelty, and genocidal violence were parts of our very foundation?  Can a society arguably predicated on a history of violent settler colonialism ever be a just democracy? 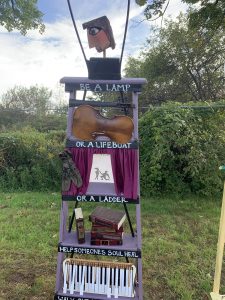 Within every major world religious or spiritual traditions are threads of transformative justice. This is expressed through motifs of forgiveness, unity, and the dismantling of harmful social norms and hierarchies. In fact, restorative and transformative justice frameworks originated in Native American communities and are at the heart of many native spiritual practices. Another example, within the Christian tradition, is the notion that the only just means of confronting harm is

“Opposing the enemy in such a way as to hold open the possibility of the enemy’s becoming just as well. Both sides must win. We are summoned to pray for our enemies’ transformation, and to respond to ill-treatment with a love that not only is godly but also, I am convinced, can only be found in God.” https://www.opendemocracy.net/en/transformation/transforming-powers-continuing-relevance-of-walter-wink/

Scholar and activist Mia Mingus says Disability justice is integral to the work of transformative justice:

A disability justice approach centers the priorities of those most historically excluded groups, such as women, people of color, immigrants, and people who identify as LGBTQ+. Disability justice is a truly intersectional approach in which, as South African social rights activist and Archbishop Desmond Tutu explained, “My humanity is bound up in yours, for we can only be human together.” https://ignitenational.org/blog/mia-mingus-on-disability-justice-and-the-importance-of-starting-locally

Student groups have raised with us ways that religious practices exclude people with disabilities, such as the requirements of certain practices. The intersection of disability and religion concentrates on the ways in which disability is viewed within religious communities, the religious texts of those religions, and the ways that the traditions support what we might call “spiritual universal design.” Thus, through the year we will “audit” our facility and our practices in collaboration with Laura Reacher and the Office of Disability Services, through the lens of ableism and disability, and interrogate the ways in which ableism harms all people.

Justice is systemic, but it needs to be practiced relationally. This year in the CRSL we hope to reimagine justice from the inside out. Just as the U.S. society requires a radical redistribution of rights and privileges and a reparation of harms in which it is embedded, a community is only as strong as the willingness of its individuals to be both accountable to others and loving to ourselves. Retributive justice and blame—even of ourselves—are easy. Transformative justice, by contrast, is like any spiritual practice: rigorous, complex, and messy; but ultimately life-giving, and perhaps the only way to restore the ideals of democracy to communities and to the country.

We hope our space in the CRSL, physical and metaphorical, offers a welcome to engage in this spiritual work.