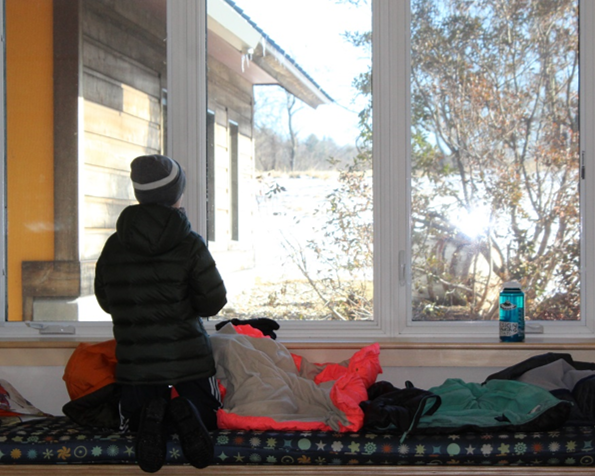 Driving the winding roads to the Ada and Archibald MacLeish Field Station on a crisp winter morning, one passes babbling brooks; sugar houses; sprawling fields and pens of cattle. Pulling into the parking lot—a permeable surface designed by a Smith student researcher, designed to keep vehicles on the periphery of the space—a wooded path carries visitors “over the river and through the woods” to the Field Station, where meadow gives way to mountain views—craggy, covered in pines.

One Friday morning in January, I had the pleasure of accompanying Campus School sixth graders to this New England landmark, learning alongside them about the rich history of the land as they engaged in nature activities led by Smith College students enrolled in “Get to Know and Learn to Share Your New England Landscape,” a one-week interterm course facilitated by Carol Berner (Education & Child Study) and Reid Bertone-Johnson (Landscape Studies).

Built in 2012, the Bechtel Environmental Classroom sits among MacLeish’s 260 acres of forests and farmland in Whately, Massachusetts, boasting certification as one of the few living buildings in the nation. “The primary purposes of the building are to encourage use, preservation, and understanding of its landscape and to foster inspiration + education (sic),” reads a wooden plaque at the entrance, titled “Beauty,” which I later learned is one of seven “petals” in the flower framework used to structure all living buildings. “The classroom will be used by students from an array of disciplines such as biology, dance, or writing,” it reads, “embodying the multidisciplinary philosophy of a liberal arts education. Student engagement and projects animate the ever-growing beauty + spirit of this dynamic landscape.” 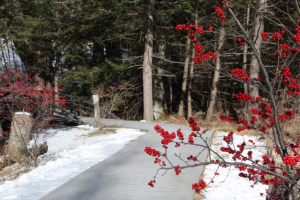 The day began with students bundled in colorful snow coats huddling in a circle as Smith students introduced them to the building, the land, and—perhaps the preeminent feature—composting toilets. Shrieks and gasps dispersed as students divided into groups, preparing to rotate through activities in and outside of the Bechtel classroom.

Circling through the building, students’ celebratory voices filled the halls: “That was actually legendary!” one boy said, climbing off of a stool from which he peered at scat under a microscope. “Can we go to the mountains?” questioned another, learning of her group’s impending hike. “Yay! I’m so excited!” she added.

I smiled, from the side, watching sixth graders’ energy, realizing—as light poured through the window—that their morning had only just begun.

Sectioned into four stations designed to engage students in all that MacLeish has to offer, college students guided five activities: 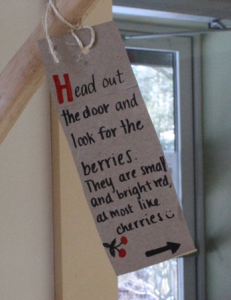 A Scavenger Hunt that led students to explore edible characteristics of sumac and black birch trees, the fire pit, chestnut orchard, and tree sculpture, and play a blindfolded “tree game” in which the subject used all senses but sight to learn about a tree, then attempted to identify it after removing their blindfold (“This was the kids’ favorite!,” one Smith student shared).

A Porcupine Hike in which students went on a quest, following clues written as rhyming couplets on weathergrams, biodegradable messages attached to trees and other natural objects, culminating in the discovery of a porcupine den (where one group caught sight of a prickly neighbor!).

A Timeline Activity in which students mapped out the history of MacLeish, starting in present day, working back to Campus School students’ birth years (2007-08, when the idea for the living building was just starting to germinate), all the way to the end of the Ice Age, when mastodons roamed the land. For this activity, students used measuring tape and stakes to talk about scale, with Smith students sharing that every 50 years equated to 1 foot on the timeline. 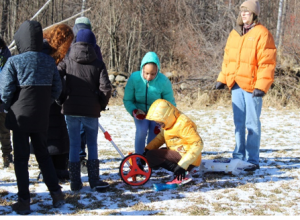 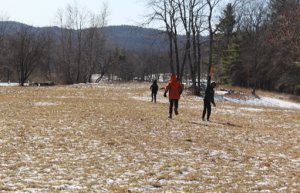 Microscopes under which students investigated what Carol called “found treasures from outside.” From a variety of animal scat discovered on MacLeish grounds, to owl pellets; wild grapes picked from vines that Campus School students noticed on their wanderings through the woods; porcupine quills; pine needles; and even students’ own fingers, facilitators framed sixth graders’ engagement by asking them to hypothesize about what they were looking at and record their observations (“The berry looks almost like a brain!” one eager scientist said. “I can see bones!” said another as he peered at owl pellets). 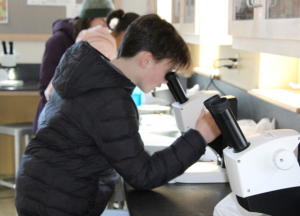 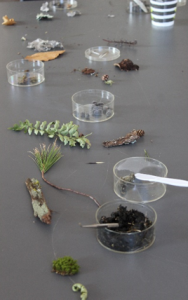 Weathergrams—letters, lists, and poems of appreciation written to nature on biodegradable tags—inspired students to think mindfully (“have a meditative moment,” said a Smith student leader) about their favorite parts of nature. Once they were finished, students were invited to hang their weathergrams wherever they wished in the outdoor landscape, where nature would “write back,” changing the appearance of the paper over time. “Dear tree, do you ever feel sad?” one student wrote. “Dear tree, did you know that a redwood tree is really big?” asked another. 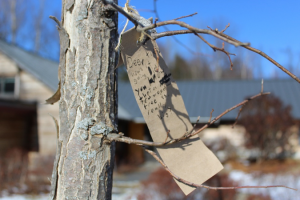 As morning turned to noon, sixth graders were on their way back to Campus School, and college student leaders settled around a table to relax and debrief after the morning’s festivities. “It was very refreshing,” they shared about working with students. “A very natural end to the week”: 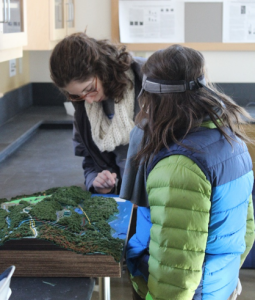 – “It was funny to be on the other end of what we were experiencing yesterday.”

– “They were very open to being energized by being outside.”

– “I appreciated their flexibility.”

In the quiet of the woods on my way back down the hill, I couldn’t help but think—glancing out at fields and mountaintops—that the “beauty” of MacLeish is, indeed, “inspiration + education” made all the more vibrant by the students who filter through these forests each year, shifting and shaping the landscape while honoring the integrity of the land on which those mastodons marched many years ago. 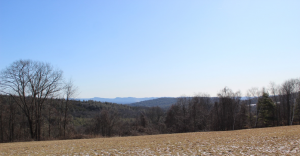