All fish are tragic

Of the many themes that emerge in MacIver’s work, food is a delightful surprise. She applies her keen sense of whimsy to delicate scenes of the elaborate pies, pastries, and breads that she encountered during her years in Paris. 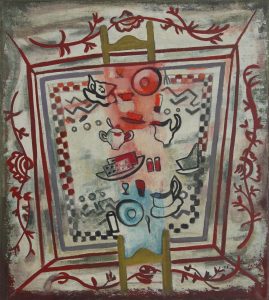 A Miracle for Breakfast

At six o’clock we were waiting for coffee,
waiting for coffee and the charitable crumb
that was going to be served from a certain balcony
–like kings of old, or like a miracle.
It was still dark.  One foot of the sun
steadied itself on a long ripple in the river.

The first ferry of the day had just crossed the river.
It was so cold we hoped that the coffee
would be very hot, seeing that the sun
was not going to warm us; and that the crumb
would be a loaf each, buttered, by a miracle.
At seven a man stepped out on the balcony.

He stood for a minute alone on the balcony
looking over our heads toward the river.
A servant handed him the makings of a miracle,
consisting of one lone cup of coffee
and one roll, which he proceeded to crumb,
his head, so to speak, in the clouds–along with the sun.

Was the man crazy? What under the sun
was he trying to do, up there on his balcony!
Each man received one rather hard crumb
which some flicked scornfully into the river,
and, in a cup, one drop of the coffee.
Some of us stood around, waiting for the miracle.

I can tell you what I saw next; it was not a miracle.
A beautiful villa stood in the sun
and from its doors came the smell of hot coffee.
In front, a baroque white plaster balcony
added by birds, who nest along the river,
–I saw it with one eye close to the crumb–

and galleries and marble chambers.  My crumb
and mansion, made for me by a miracle,
through ages, by insects, birds, and the river
working the stone.  Every day, in the sun,
at breakfast time I sit on my balcony
with my feet up, and I drink gallons of coffee.

We licked up the crumb and swallowed the coffee.
A window across the river caught the sun
as if the miracle were working, on the wrong balcony.

While “A Miracle for Breakfast” pairs so wonderfully with the painting above, “Romantic Breakfast for Two,” I urge you to also look at them as two very separate works, produced by two different artists, but born of the same time in history (the poem was written in 1935, the painting completed in 1939). While both works reframe the everyday act of eating breakfast in a whimsical, exciting way, they are also both the product of artists who had lived through years of the Great Depression,  and well knew the experience of going hungry. In “A Miracle for Breakfast” Elizabeth Bishop is almost certainly reflecting on the bread lines that filled the country in 1935. Although there is a less clear connection to the Depression in MacIver’s work, there is no doubt that after a decade of national and personal hunger and financial strain, a set table of food is a loaded image. The way each artist deals with this subject matter in a different way is particularly interesting here, as both use a veil of mystery to frame what is otherwise a fairly intense reflection. For Bishop, this veil is the “miracle” of bread crumbs and drops of coffee, and for MacIver it is the “romance” of a breakfast for two.

The vast majority of MacIver’s paintings that include food, and all of the examples above, are from the 1960s, a time of abundance as she reached the height of her career. “Romantic Breakfast for Two” and “A Miracle for Breakfast” are both reminders of the scarcity of the Depression, and demonstrative of the ways both artists indirectly engaged with the fraught political and social climate of that age, through connecting with a universal, everyday element of human existence–breakfast.