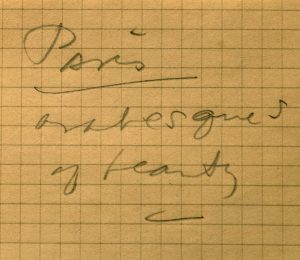 Like most 20th century New York artists, the influence of Europe was a significant force in both MacIver’s own practice and that of her social circle, even before her first trip to Europe in 1948. By the 1930s her work was being exhibited alongside that of the European modernists who were fleeing persecution in their home countries, as was the case in the 1936 MoMA exhibition “Fantastic Art, Dada, and Surrealism.” The 1960s, however, were truly the time in which MacIver’s life became personally enmeshed with Europe, as she and Frankenberg spent much of the decade living in Paris. They initially moved there after Frankenberg received a Fulbright grant to teach at the University of Caen in 1961, returning to New York in 1964. They soon went back to Paris, however, living there again from 1966 to 1970.

The sketches and paintings below are only a very small portion of a much greater collection, as 1960s sketches of Europe took up a sizable portion of the archive upon which this website is based. Of the hundreds of possible images, I have chosen sketches and notes that I hope will help draw a broader picture of the ways in which the sights, sounds, and experiences of Europe enlivened the sense of wonder in MacIver’s work.

Like generations of poets and artists before him, E. E. Cummings also found inspiration on the streets of Paris. “Paris;this April sunset completely utters” is a beautiful ode to the city basked in the glow of twilight. I chose this poem especially because of the way that it shows Cummings looking at Paris as containing certain aesthetic and historical quality that is completely unlike what one can experience in the States, a sentiment that is visible throughout many of MacIver’s notes and sketches above.