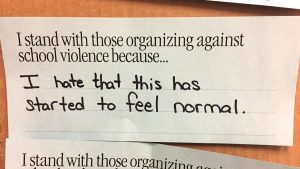 “I hate that this has started to feel normal.”

The Center for Religious and Spiritual Life co-sponsored School Violence Prevention Teaching and Learning Day on Thursday, an initiative led by President Kathleen McCartney. President McCartney opened the central event of the day, a discussion panel, after recognizing that mass shootings are one piece of a larger issue of gun violence in our society. “There is a lot we can do when people rise. These students are rising and we rise with them,” she said, commending the efforts of young activists combating gun violence. 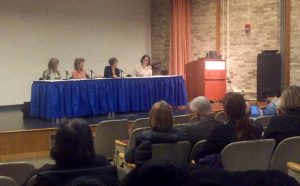 Student discourse on campus about gun violence is active. Many face the same challenge: reconciling the specific issue of gun violence in schools with systemic gun violence as it relates to class and racial divisions. While violence may manifest in different ways and in different spaces, many of the same social structures contribute to school shootings, domestic violence, and hate crimes, among other issues. Students looking to explore how their faith helps them navigate this difficult topic are encouraged to meet in the Bodman Lounge on Tuesdays at noon for Interfaith Lunch.

Marianne R.M. Yoshioka, a panelist and the Dean of the School of Social Work, spoke of “circles of vulnerability.” These circles represent the ripple effect a mass shooting has on the school targeted, the community, and the nation. These impacts lead to a lack of relational trust in communities and threaten children’s strength of attachment to one another and to their school system. Marianne closed her comments by sharing a reassuring recognition: the tragedy of mass shootings also reveals the emotional resilience and strength of children, parents, teachers, and community members. 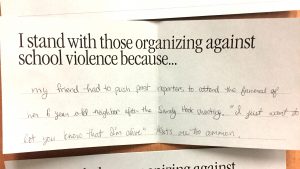 “My friend had to push past reporters to attend
the funeral of her 6 year old neighbor after the
Sandy Hook shooting. ‘I just want to let you
know I’m alive’ texts are too common.”

Dr. Vicky Banyard continued this narrative, speaking to collective efficacy as an early interventionist action. Collective efficacy is when people feel a sense of belonging in their community, a sense of “mattering.” Collective efficacy can be cultivated through availability and engagement with social bodies like student organizations, faith groups, and other membership groups. The final panelist, Anne Gilligan, is the State Program Coordinator for the Massachusetts Department of Elementary and Secondary Education. “Just like in a fire drill, we want everyone to have a strong understanding of what to do in an emergency,” she said. Anne’s focus was cultivating a safe and prepared school environment. 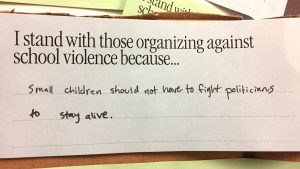 “Small children should not have to
fight politicians to stay alive.”

Community. Collective efficacy. Preparedness. These three elements constructed the foundation of the panel’s approach to gun violence in schools. These accomplished women spoke to their expertise while emphasizing the importance of listening to youth who lead the charge. “This is their story”, Dr. Banyard concluded.