Doing Things That Change You: Action to Reflection at the CRSL 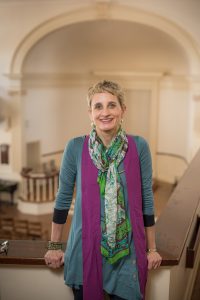 This summer I had the privilege of participating in the leadership of a conference entitled The Body, A Vehicle for Justice, Advocacy, and Change. https://starisland.org/program/star-gathering-2-family-conference-the-body/.

Each day we began with a worship service in the Christian tradition, and this was followed by a workshop on the theme. On the last day as a group we conducted a “liturgical direct action.” That is, we practiced what it would be like to combine a worship service with a public action/protest. https://propheticimagination.org/liturgical-direct-action/

We walked and circled up in formation, read a prayer, and then read a statement we had composed demanding that immigration and customs enforcement officials should not be allowed to raid businesses and take undocumented workers into custody, causing children to come home after school to find their parents gone. We acted out this ritual in our private setting as if we were in public—which would have involved blocking an intersection to draw attention to our cause. We were all encouraged to “try this at home”- to use rituals from our faith tradition to enact a public statement.

This is faith in action. This sort of ritual reminds me of the seamless connection between spiritual practice and activity on behalf of the world. In the Center for Religious and Spiritual Life we try to open doors of spiritual exploration and create spaces of sanctuary and retreat for the Smith community. At the same time, we are committed to ethical action as an outcome of the spiritual life. What we do is often more important than what we believe. Karen Armstrong, scholar of religion, says about what she learned on her journey:

Religion is not about accepting 20 impossible propositions before breakfast, but about doing things that change you. It is a moral aesthetic, an ethical alchemy. If you behave in a certain way, you will be transformed. The myths and laws of religion are not true because they conform to some metaphysical, scientific or historical reality but because they are life enhancing. They tell you how human nature functions, but you will not discover their truth unless you apply these myths and doctrines to your own life and put them into practice.

Thus we offer programming through which we can practice ethical reflection and action, social justice, and civil engagement. Sometimes our belief and guiding principles motivate our action in the world. But sometimes it is the opposite—the ways we jump into this messy world and act within it the best we can be, is sometimes how we learn what we believe.

Along with the Smith College Year on Climate Change, we will be contributing to the conversation on environmental peril with a spiritual voice. During the Climate change conference, we will work with the Botanic Garden and the Design Thinking Initiative on an installation that will combine meditation with artwork expressing our connection to the earth, our fear of its peril, and our commitment to live out our hope. We will also work with other campus groups to learn more about and take action on the climate refugee crisis. A respected colleague of mine who is a scholar of religion noted the other day that “science has not, by itself, changed the tide of thinking on the climate crisis.” He was referring to the fact that faith based, religious perspectives are urgently needed in this conversation. Our commitment to reflection, resistance, and rejuvenation will thus focus this year on all forms of environmental justice.

We are offering multiple opportunities for practices that support spiritual flourishing, including three meditation groups, one of which focuses specifically on the climate crisis from a Buddhist perspective. Our Catholic Club sponsors regular masses, and we provide transportation to several Christian houses of worship in the area. Our Jewish community gathers for weekly Shabbat dinners, and there will be dietary and academic considerations in place for Jewish fall holidays. On October 31 at 8:30 a.m. we will hold a harvest breakfast for our community religious liaisons, campus collaborators, and community partners. At that time we will provide an update on our Center mission and goals; and hear from others about work on campus and the community. We are excited to tell you more about a restructuring of our Center, wherein we are now under the umbrella of the Office of Equity and Inclusion.  In response to the current socio-political climate we are more and more called to the work of protecting religious minorities whose beliefs and cultures are being targeted. We therefore feel all the more supported in this work by our institution and that this new configuration is a “good fit.” Now more than ever, in the words of William Sloane Coffin, peace activist and college chaplain at Yale in the 1960’s, “The world is too dangerous for anything but truth and too small for anything but love.”

September in North America, and hence here at Smith College in Northampton, MA is unique in how beginnings and endings are woven together. Summer ends and the plants and trees begin to be slowly drained of their chlorophyll in order to go dormant for the winter in service of regeneration and new growth. The Jewish Holidays of Rosh Hashanah and Yom Kippur represent saying goodbye to old grievances, coming to terms with the impact of our actions and the actions of others, and beginning a New Year. So it is a good time to go meditate on poet Rainer Marie Rilke’s famous musing:

Be patient toward all that is unsolved in your heart and try to love the questions themselves, like locked rooms and like books that are now written in a very foreign tongue. Do not now seek the answers, which cannot be given you because you would not be able to live them. And the point is, to live everything. Live the questions now. Perhaps you will then gradually, without noticing it, live along some distant day into the answer.

So you may or may not know what you believe, and you may not always know how to act. We have even been told all our lives to think before we act, and indeed, various contemplative practices such as mindfulness help us do so. However, sometimes we need to step out on faith, and act because that still small voice tells us that’s what is called for.

That is liturgical action. Sometimes our explorations, adventures, and even risks help us gradually, “live along some distant day into the answer.”

Please inquire with us about any of the programs listed here that interest you, and like us on Facebook, and we hope we will see or hear from you here!

In friendship and appreciation,

Matilda Cantwell and the CRSL staff