Times of Captivity, a Time of Liberation 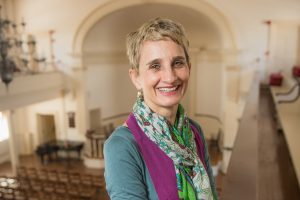 For the next two issues, our newsletter will focus on the theme of liberation. Passover, the holiday which began last night, April 8, commemorates the successful exodus of the Hebrew people out of slavery in Egypt. The COVID-19 crisis kept most away from their family Seder tables, but the holiday marks a time for Jews to remember the journey from bondage to freedom, and consider this journey anew.

As a Christian who grew up celebrating many Jewish holidays, I have always loved the Passover meal and going through the questions in the Haggadah which invite us to look at what binds us, and that from which we need to free ourselves. The Hebrew people did not gain their liberation easily, but through deep struggle and choosing the hard road. Thus we are invited to consider the places in our life where we might be imprisoned by our own fear, our trepidation about leaving a familiar place, even if it is constraining or even oppressive.

Easter Sunday, the most important holiday for Christians/Catholics, which falls this Sunday, the following Sunday for Orthodox Christians, also invites us to freedom; from that which holds us back, from the dark places that encircle and trap us. It invites us out of limitations and the terror of death, into courage and new life.

A great many of us are comfortably housed, safe, and employed right now. But even more of us are not. And as comfortable and safe as many of us are, we are all indeed constrained by the multiple changes brought on by COVID-19.

So what better time for us then, to consider, deeply, those who are in true captivity. Immigrants, incarcerated and detained people, for example. What better time to consider the liberation of those whose imprisonment is among the greatest tears in the fabric of the United States of America, a country whose wealth was built in part through the labor of enslaved peoples.

Lately I have been following the movement to de-carcerate Western MA, which works to release from prison those whose release dates are in the near future, those who are inside for nonviolent offenses but could not pay bail, and so on. This movement was sparked in order to lower the risk and save the lives of those in close proximity during the COVID-19 pandemic. But it sheds light on an unjust system and those whose freedoms have been artificially curtailed due to structural issues such as racism and poverty.https://docs.google.com/document/d/e/2PACX-1vR_heu66surcN4NlK53CrzPPyHJiajisZZu-QYHwJJkWX5WAsGlVT5c2PU0-wPHm2s1F50aZB_3Q53m/pub

At the same time in the confines of my home and yard and neighboring trails and roads, I am trying to consider what holds me back from giving my best, however small it might be, to mend this broken but beautiful world. And on a day when I am tired, I have an even smaller domain to address—what fears hold me back from being as loving as I could? Where does staying put, like the Hebrew people could have done, in a certain mindset or belief, appear easier than getting free?

These are hard and frightening times. Some days we are caught up in our own isolation and deprivation of some of the things of most value—travel, certain creature comforts (like a haircut or a latté,) and most of all gathering with face to face human contact. Other days many of us are up against the realities of sickness and death.

But these might be the best times. We might be forced out of certain captivities that have gotten too comfortable. Again one of my favorite quotes comes to mind:

Another world is not only possible, she is on her way. On a quiet day, I can hear her breathing.