In a time that has been so divisive, when friendships and and family relationships have been torn apart by differences in perspective about social issues, this poem speaks strongly to me about how we hold and express our convictions.

Here is what educator and philosopher Parker Palmer says about this poem:

Here’s a poem I re-read frequently. As short and simple as it is, it helps me remember that nothing new can grow between us when we speak to each other from “the place where we are right. More important, the poem leads me to ask what I think is a question worth pondering: How might things change if we began our political conversations not from our certainties, but from our “doubts and loves”? Many of us who differ politically love the same things — our children and grandchildren, our country, the natural world. Many of us who differ politically harbor the same doubts — that what’s being done (or not done) to care for the things we love is the best or the right thing to do. Yes, we differ on what ought to be done. But what if instead of starting by arguing over solutions — over “the place where we are right” — we began by sharing our loves and doubts? I suspect that our political conversations would be much more productive because they would proceed from common ground. Hey, it’s worth a try! One thing I’m certain about is that the other way isn’t working! 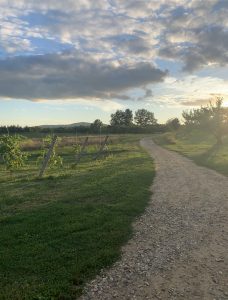 When I think of doubts and loves, I think about asking ourselves why we hold a certain position with such vehemence, and what are the most courageous ways to convey our viewpoints.

What happens when we “dig up” the earth of our convictions? Do we perhaps loosen the soil and make it more fruitful? I believe in some ways, our remote situation has brought us closer as a community. On the other hand, some of the tendencies to engage in monologues, instead of dialogues, have become more pronounced.

Loretta Ross helps us think about when our expressions of opinion or criticisms of others are not fruitful:

Professor Ross thinks call-out culture has taken conversations that could have once been learning opportunities and turned them into mud wrestling on message boards, YouTube comments, Twitter and at colleges like Smith, where proving one’s commitment to social justice has become something of a varsity sport. I think we actually sabotage our own happiness with this unrestrained anger. And I have to honestly ask: Why are you making choices to make the world crueler than it needs to be and calling that being ‘woke’?”

Loretta Ross reminds me that there is always a better way of expressing our beliefs than shaming others.

This poem reminds me of something I have always believed–that truth is always complex and multifaceted, our perspectives are always subjective, that there is a grain of truth hidden in everything;  except when it isn’t, except when they aren’t, except when it cannot be found..

James Baldwin famously said: “We can disagree and still love each other. Unless your disagreement is rooted in my oppression and denial of my humanity and right to exist.”

I believe that finding the difference is not always easy, but it’s necessary that we look until we do. And that keeping the humanity and right to exist of others is the best compass with which to always orient ourselves.