Reflections from Greece: The Light in Moria

This piece is part of a series highlighting a student’s spiritual experiences while studying abroad.

In late May 2017, I spent eight days volunteering with EuroRelief in the refugee camp Moria, located in Lesvos, Greece.

I’d been in Geneva, on the Smith in Geneva program. I was working for an international NGO, attending talks about the refugee crisis, and writing humanitarian papers. As the semester progressed, though, all of this wasn’t enough. I developed a desire to go out beyond the ideal city of limits of Geneva and into the brokenness of the world. I wanted to actually meet the people that we were talking about in class and hear their stories from their own mouths and with their own voices. I felt a void between my work and the reality around me. I’d talk about the refugee crisis to my coworkers, write a paper about policy interventions we should take, and then walk home along a nice, well-maintained sidewalk seeing the magnificent Geneva Jet d’eau in the distance.

I wanted to go for the whole summer. Just take a plane to Greece and go wherever I could find some way to help. After a series of conversations, I ended up applying to be a volunteer for the Global Aid Network (GAiN) with funding from the Smith Center for Religious and Spiritual Life. GAiN partners with EuroRelief to distribute aid such as food and blankets, as well as do manual labor and chores in Moria. It’s the humanitarian partner of Cru, which is a US-based global Christian ministry that I’ve been involved with at UMass since my first year at Smith. Before I knew it, I was headed to Greece, with a hope to be some kind of light in what I expected to be a dark place. 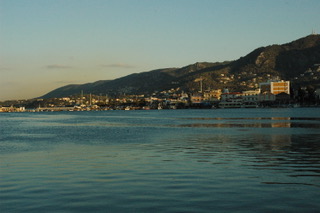 When I got to Moria, I was quickly made aware of the limitations that I would have as a young female volunteer in a refugee camp filled with young men from drastically different cultural backgrounds than myself. So I focused on interacting with the small population of female refugees—and what a blessing it was to spend time with them! Many of the women were from the Congo and spoke French, which was nice because I was able to greet these women in a familiar language, and it didn’t hurt to get in a little French practice for my upcoming final.

A few other volunteers and I organized a Women’s Day. We set up games, a makeup station, and nail art supplies, and just invited to women to come and take some time for themselves. I was so glad to give the women a space to relax and get their minds off the difficult situation they faced every day. These are women who have cared for their children, even been pregnant, as they fled oppression, war, and the destruction of their homes. No human should have to live in the conditions these women were. The housing lacks privacy and is crowded, but in addition to all of this, the women in Moria have to handle dirty diapers and quiet their crying babies. 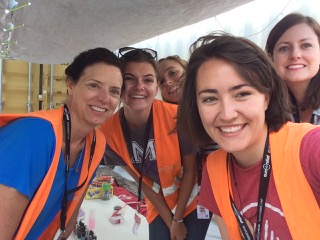 In the midst of all of this suffering, though, there was a light of hope in Moria. Perhaps one of the most powerful moments of my entire experience in Moria was when I wandered into a Congolese Church service.

The service was held in a large tent, organized and planned by the Congolese refugees, and alive in so many ways. The message and music could be heard across the whole camp. The pastor shared the message of Jesus Christ dying on the cross for the sins of the world, and he used imagery of an innocent lamb being slain to demonstrate the incredible and sacrificial love displayed on the cross. In Jesus Christ, he explained to the crowd filled with Arab and African refugees, we are made new and forgiven for our sins. The message was powerful, he delivered it with passion, and the room received it. It was a beautiful picture of people from all over the world, united by a common desire to find a safe home, coming together to worship and listening to the message of ultimate redemption in Jesus Christ.

One of the women I had been interacting with earlier in the week invited me to sit by her. She taught me some dance moves as we worshiped together and welcomed me into the space. It felt like heaven coming down to earth, a moment of joy in the midst of complicated chaos. There was light in Moria and it shined bright.

One Response to Reflections from Greece: The Light in Moria