Reflections from Greece: Sitting in the Dirt

This piece is part of a series highlighting a student’s spiritual experiences while studying abroad. This is part two, read part one – Reflections from Greece: The Light in Moria.

On the day of my first shift volunteering in Moria, I was invited to have dinner with one of the Nigerian refugees, named Kelechi. Two of the volunteers with my group, Sam and Betty, were brave enough to clean the bathroom of the camp, which they described as “performing an exorcism.” As a thank-you for taking on the job, Kelechi invited them to enjoy a home-cooked authentic Nigerian meal that evening. Betty and Sam were generous enough to include me, and we spent the afternoon sitting in the dirt, watching Kelechi prepare our meal. Kelechi told us his story as well as his dreams of coming to America and owning his own restaurant. He even appointed Sam as his assistant chef. 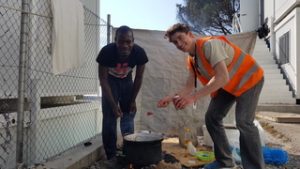 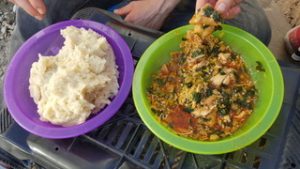 Earlier in the day, I had helped with food distribution. We would bring a certain amount of food to each room, and I learned quickly that some of the refugees weren’t eating all their food. Immediately, I was outraged! I thought we were wasting resources and that there must be a better way to do this. Of course I thought I knew best because I had just written a paper about how to do this “right” and listened to talks at the UN where they told me about how to do it right. I thought why don’t we just have the refugees come pick up their food so we don’t have to see it go to waste? 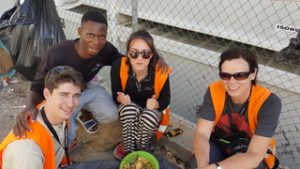 Just a few days later, I came crashing down from my ivory tower. For some of the other areas of camp, this was the method of food distribution. And this method didn’t work perfectly. People would cut the line, fights started, people threw rocks, and chaos descended.

I learned that life is much more about sitting in the dirt, listening to where another person has been and where they want to go, than thinking up “solutions” and coming up with policy recommendations. I wanted to go out and fix, but instead I learned to sit in the dirt and listen.

This entry was posted in Student Reflections and tagged Christianity, community service, travel. Bookmark the permalink.

One Response to Reflections from Greece: Sitting in the Dirt