The idea for Meridians began with Ruth Simmons in the spring of 1996, the first year of her Smith College presidency. She asked senior faculty in the Women’s Studies Program if we would be willing to work with her to found a journal dedicated to women of color. From the earliest conversations, the project had twin goals: to establish a forum for publishing the work of women of color, where their work would be sought after and central rather than tokenized or marginal, and to establish a pipeline for recruiting and retaining feminist scholars of color into leadership positions at Smith.

By the fall of 1997, the editorial collective was formed. As we conducted our research about other feminist journals, created a mission statement, nominated our boards, formulated policies, planned an operating budget, and implementation timeline for seeking funding and publishing the first issue, we worked by consensus. Our research included conversations with editors from Callaloo, Feminist Studies, Hopscotch, Journal of Feminist Studies in Religion, Journal of Women’s History, Transitions, and Yale Review, among others, about the functions and structure of the editorial office, forms of compensating editors, publishing arrangements, and the editorial review processes used by other journals. We all met with Beverly Guy-Sheftall, former editor of Sage, who wisely cautioned us not to promise more than we could deliver in our mission statement, especially about our global dimensions, if most of our board members were US-based academics. Above all, she advised us to build in adequate institutional support for the editor and to publish on time.

In the spring of ’98, the editorial group made a formal written proposal to Ruth Simmons and to Doug Bennet. An integral part of the proposal was to establish a vital intellectual community and productive working climate for faculty and students: “Our journal would give national visibility to Smith and Wesleyan’s commitments to recognize women of color in our academic mission, to recruit and retain outstanding faculty of color at both our schools, and to engage our students, through internships and conferences, with this exciting scholarship and with national and international scholars. In founding this journal and disseminating this important research, we could take a leadership role in providing the means for institutions of higher education around the country to build more inclusive curricula for the twenty-first century” (founding proposal).

In the summer of 1998, Wesleyan University Press submitted our proposal to three external reviewers who endorsed the mission statement and our boards, and unanimously agreed the journal would fill an urgent need and find an eager audience.

In September, our national board convened for a two-day working meeting. We identified the area of expertise of each member for reading submissions, and received their nominees for a broad network of additional reviewers, whom we contacted that fall. Members also submitted names, dates, and locations of upcoming professional conferences at which they would scout and solicit submissions.

We recognized that each of our terms (feminism, race, transnationalism) could be misused or misunderstood. Rather than abandon these terms, we agreed not to “turn them over to the enemy”, but to use the journal to critically interrogate their usefulness for analyzing women’s experience. We affirmed our commitment to study both the US and transnational contexts and their intersections, as we later wrote: “The founding of Meridians marks significant paradigm shifts. No matter what theoretical or disciplinary paradigms bring feminist scholars to this historical moment of knowledge production and political action, we work in interlocking worlds in which the post-colonial and the neocolonial collide and interpenetrate at home and elsewhere in complex ways that our journal seeks to analyze” (Introduction, vol.1, no. 1).

Members of the boards agreed that the quality of the scholarship was the most important criteria for publication and that an excellent essay would be deeply and fully informed by the relevant terms, debates, and intellectual traditions of scholarship on women of color, and that our peer reviewers, who would also predominantly be scholars of color, would be the best judges of such knowledge. We also all agreed on the necessity for blind peer review of the manuscripts, and believed the credibility of such a juried process outweighed the risk of accepting too many submissions by white authors.

Our discussion about how to incorporate creative work into the journal raised these questions: Did we expect poetry, fiction, art, photography to be produced by women of color or might such work merely have women of color as its subject? Because women of color have often been relegated to the realm of the expressive rather than the theoretical or analytical, did having only women of color produce the creative work we published reinforce these distinctions? Unlike a scholarly essay, which often involves explicit identification or self-conscious interrogation of the author’s own subject position, creative work might seem more transparent even though aesthetic choices are always present and potentially political. We found it harder to evaluate whether we thought “legitimate” authorship of creative work was limited to women of color and therefore decided to review pieces on a case by case basis without setting policy on this issue until we had some experience of submissions.

The structure we proposed included three tiers of commitment and responsibility: the highest level of commitment and responsibility would be assumed by the editorial collective: Smith and Wesleyan faculty members whose function was to set policy, review budgets, to establish criteria for board membership and for submissions, to solicit manuscripts, and to make an initial assessment of submissions in order to recommend external reviewers, and to evaluate the managing editor.

The advisory board consisted of scholars, activists, and creative writers whose “leadership and contributions to feminist inquiry” had gained them national and international reputations. We asked these women to lend us their name rather than their labor: “Your presence on our masthead will signal to contributors and readers the political commitments we stand for and the level of excellence we hope to achieve” (letter of invitation to serve, April 1998).

Our nominees for the national editorial board were expected to work more closely and more intensively with us. We agreed that we would not privilege any one methodology, theoretical framework, or rhetorical style and that our editorial board should reflect the “fields, methodological approaches, institutional affiliations or geographical locations, and ethnic diversity the journal seeks to represent” (founding proposal). We were particularly eager to include scholars who did research in other countries and who had established networks of scholars and activists outside the US Candidates were nominated by a member of the collective who knew them or their scholarship well. We compiled bibliographies for each of our nominees; two members of the collective intensively reviewed the published work of each nominee by these criteria, and reported on it to the group. In our discussion, we also considered what we knew of their collegiality and ability and willingness to mentor young scholars. Successful candidates for the editorial board were approved by all the members of the collective. Both boards were invited by President Simmons to serve for three-year renewable terms in the spring of 1998. All but a handful of our original nominees agreed to serve.

In the fall of 1998, Gayle Pemberton, Tom Radko (director of Wesleyan University Press), and Susan Van Dyne met with Wesleyan President Doug Bennet to solicit Wesleyan’s support for the journal. We secured Bennet’s commitment to a joint proposal to the Ford Foundation, as well as the University’s pledge to subsidize the production costs of the first two years (or four issues) of the journal’s publication, as their in-kind contribution. Wesleyan Press agreed to assume responsibility for the production (copy-editing, proof-reading, printing, and distribution), and marketing of the journal and to oversee subscriptions.

Because all of the Smith faculty of color in the founding collective were untenured when we began the project, we proposed that we might initially need a visiting senior editor during the first several years of publication, but that greater stability for the journal would come from having an able pool of Smith faculty trained and willing to serve in the long-term future.

Our first search for a senior editor conducted in the spring of 1999 was unsuccessful. Although Meridians’s mission was uniformly applauded by all we contacted, we attributed the small pool to our lack of substantial funding and the lack of a tangible product. We did, nonetheless, gain a much more complete understanding of what we needed in a senior editor through the search process.

In the summer and fall of 1999 we worked most intensively on gathering the materials for the first issue. We tested the editorial review process as we reviewed nearly 180 unsolicited manuscripts since our first call for papers in 1998, and we succeeded in meeting our goal of setting a new benchmark among academic journals for timely decisions, almost all complete within three months from submission. Our steadily expanding network of peer reviewers proved as knowledgeable and generous as we’d hoped. Reader’s reports were detailed, sympathetic yet candid about needed revision, constructive in content and tone. As one contributor commented on her anonymous reviewers: “their comments represent some of the most nuanced responses I have received during the editorial process for articles submitted to a variety of journals . . . I look forward to further comments from your obviously savvy editorial board.” 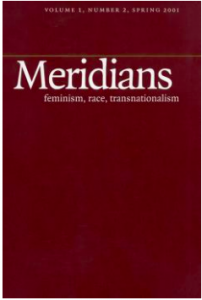 Each member of the editorial group took responsibility for aggressively soliciting a stellar piece for the first issue, recognizing that the profile of the first issue would in large part shape of the issue who our subscribers and future contributors would be. We were committed to including recent graduate students as well as known authorities in a field, and all of our contributors willingly participated in several rounds of revision and wrote (and rewrote) our introduction. Finally, we enlisted members of our international advisory board to reflect on the key terms of our title—feminism, race, transnationalism—to chart what these terms have contributed to progressive social movements and to identify the challenges ahead for women around the world. This opening “counterpoint” highlights the central mission of Meridians to illuminate both the intersections and contradictions of these terms in the specific lives of women.

Our second national search for a senior editor in the winter of 1999-2000, once funding for the start-up phase was secure and Meridians’ mission more widely known, yielded stronger candidates and a larger pool and enabled us to make the stellar appointment of Kum-Kum Bhavnani, who began a two year term as senior editor in residence at Smith College in July 2000. Dr. Myriam Chancy came on board as the next editor in 2002, followed by Professor Paula J. Giddings in 2004, and Ginetta E. B. Candelario in 2017.

Elizabeth Hanssen became Managing Editor in February of 2000. For the first seven months of the Ford grant, the journal had depended on a succession of two temporary half-time staff members in this position. Having the position filled with someone of her caliber and with long-term commitment to the journal brought much needed stability and continuity to all of the operations of the editorial office.