Indigenous Feminisms Across the World

The due date for this call has past. If you are offering a late submission for special issue Indigenous Feminisms Across the World, please contact the office, meridians@smith.edu. Thank you! 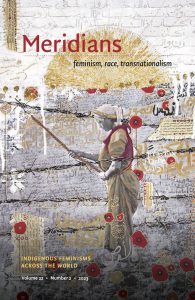 Several years ago Meridians joined many academic organizations and institutions in the United States in issuing a land acknowledgment, recognizing that our Western Massachusetts-based offices are on Nonotuck land. In this, we formed part of a wave of solidarity with Indigenous peoples that necessarily begins with recognition of how settler colonialism is deeply ingrained, embedded, and naturalized in every way, from place naming conventions to thought structures.

Thus, as a first step toward moving from acknowledging to acting in the spirit of redress and forum building, Meridians undertook an audit of the content we have published in the twenty years of our existence. We found a shocking (if all too common) lack of Indigenous feminists and/or Indigenous feminist work in our oeuvre to date. As a result of this data, and by way of beginning to transform our practice, we have endeavored to increase the participation of Indigenous feminist scholars and knowledge producers as peer reviewers and contributors to the Meridians project. Candelario’s preliminary efforts yielded several publishable submissions focused largely on the Americas. Rather than intersperse these among other issues, we decided to include them in an entire issue devoted to Indigenous Feminisms Across the World.

Meridians also invited several Indigenous scholars with long-standing ties to the journal to guest edit or co-guest edit a special issue with Editor Ginetta Candelario, whose scholarly expertise includes racial formation in the Americas, but none were able to take on this project. However, one of those Indigenous consultants suggested that Basuli Deb, a Bengali scholar who works on materialities of Indigenous and transmigrant lives and who has published in Meridians, would be well suited to the role. So it was that Deb and Candelario began their collaboration as co-editors of this special issue, which we hope will not only inspire submissions to this issue, but to Meridians in general. Likewise, we hope this will inspire proposals for future issues guest edited by Indigenous feminist scholars of feminism, race, and transnationalism.

This new special issue on transnational feminist approaches to Indigeneity intervenes in conversations where “decolonial feminism is often associated with Indigenous scholars and those from the Americas, and postcolonial feminism with scholars from South Asia, Africa, and the Middle East.” We hope to bring together conversations about Indigeneity from across Asia and Africa as well as Australia, Europe, and the Americas. A transnational comparative approach to Indigeneity between the Americas and the “elsewhere” as a philosophical category enables a productive decentering of the Western Hemisphere. Thus, our goal is to explore the praxis-driven possibilities of activist, creative, and epistemic engagements within and across hemispheric Indigenous politics, economies, histories, and peoples.

In that spirit, the editors of this issue of Meridians invite activist, creative, and scholarly submissions, as well as overlaps of these, that speak to perspectives that both include and decenter the Americas in thinking about Indigeneity. We seek submissions that will create space for voices about gendered Indigenous epistemologies and practices grounded in experiences from other transnational, regional, and local experiences that are regularly marginalized in conversations about Indigeneity in the Americas. Submissions focused on New Zealand, Australia, Kenya, DRC, Somalia, South Africa, Indonesia, India, the Philippines, Palestine, Kashmir, Okinawa, and Ainu are especially of interest to us.

f you are offering a late submission for the special issue Indigenous Feminisms Across the World, please contact the office, meridians@smith.edu.

For questions about the manuscript review process, email: meridians@smith.edu.

Image Credit: “Woman Digging Thorns Out of Field” (2020) by Dana Barqawi, a multidisciplinary artist and urban planner based in Amman, Jordan.